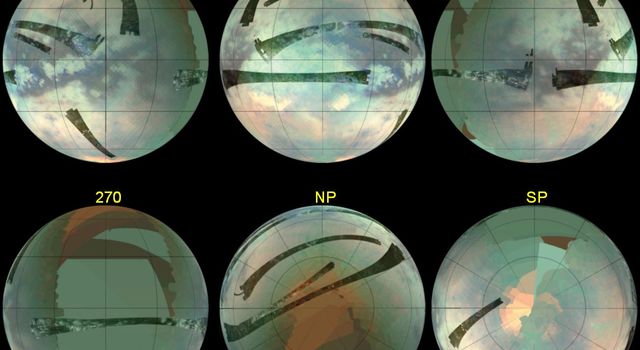 Infrared and Radar Views of Titan 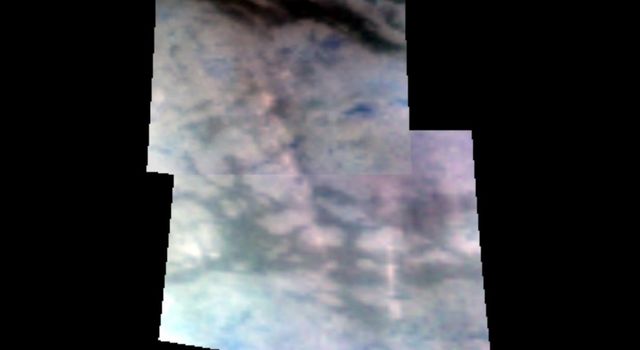 Click on the image for movie of
Exposing Titan's Surface

This image is a composite of several images taken during two separate Titan flybys on Oct. 9 (T19) and Oct. 25 (T20).

The large circular feature near the center of Titan's disk may be the remnant of a very old impact basin. The mountain ranges to the southeast of the circular feature, and the long dark, linear feature to the northwest of the old impact scar may have resulted from tectonic activity on Titan caused by the energy released when the impact occurred.

The Cassini-Huygens mission is a cooperative project of NASA, the European Space Agency and the Italian Space Agency. The Jet Propulsion Laboratory, a division of the California Institute of Technology in Pasadena, manages the mission for NASA's Science Mission Directorate, Washington, D.C. The Cassini orbiter was designed, developed and assembled at JPL. The Visual and Infrared Mapping Spectrometer team is based at the University of Arizona where this image was produced.

For more information about the Cassini-Huygens mission visit http://saturn.jpl.nasa.gov/. The visual and infrared mapping spectrometer team homepage is at http://wwwvims.lpl.arizona.edu.