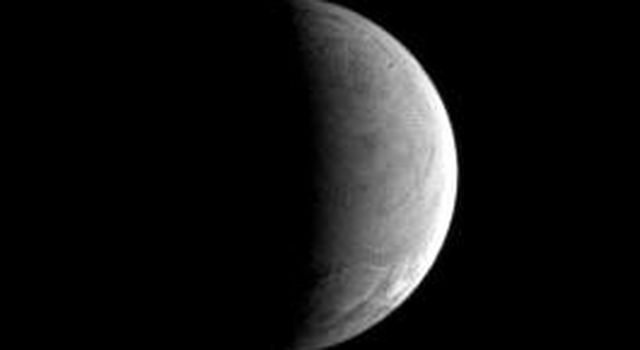 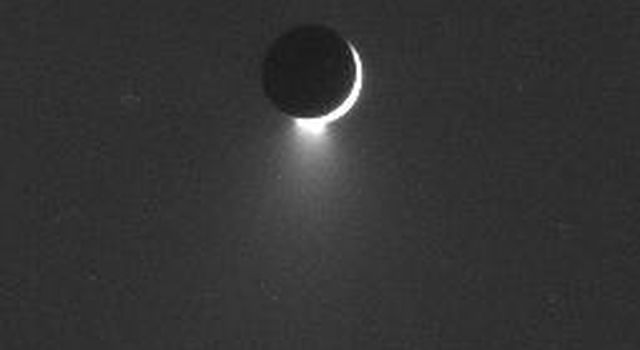 Wispy fingers of bright, icy material reach tens of thousands of kilometers outward from Saturn's moon Enceladus into the E ring, while the moon's active south polar jets continue to fire away.

This astonishing, never-before-seen structure is made visible with the sun almost directly behind the Saturn system from Cassini's vantage point. The sun-Enceladus-spacecraft angle here is 175 degrees, a viewing geometry in which structures made of tiny particles brighten substantially.

These features are very likely the result of particles injected into Saturn orbit by the Enceladus geysers: Those injected in the direction of the moon's orbital motion end up on larger, slower orbits and trail Enceladus in its orbit, and those injected into the opposite direction end up smaller, faster orbits and lead Enceladus. (Orbital motion is counter-clockwise.) In addition, the configuration of wisps may hint at an interaction between Saturn's magnetosphere and the torrent of particles issuing from Enceladus.

The image was taken in visible light with the Cassini spacecraft wide-angle camera on Sept. 15, 2006, at a distance of approximately 2.1 million kilometers (1.3 million miles) from Enceladus. Image scale is 128 kilometers (80 miles) per pixel.