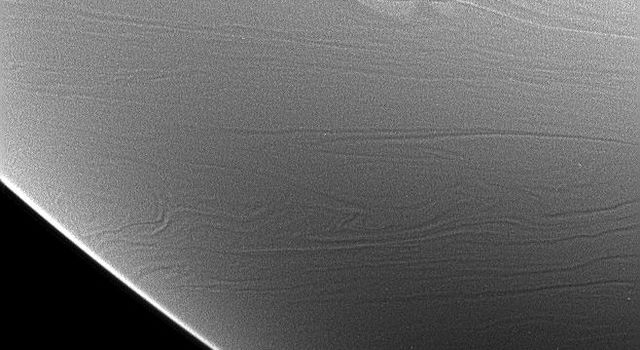 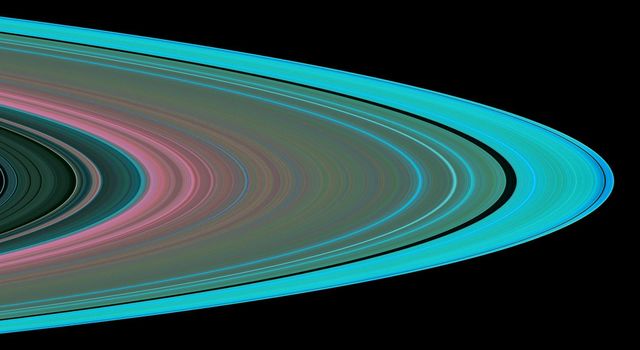 Waves and Small Particles in Ring A

Saturn is a source of intense radio emissions, which have been monitored by the Cassini spacecraft. The radio waves are closely related to the auroras near the poles of the planet. These auroras are similar to Earth's northern and southern lights. This is an audio file of radio emissions from Saturn. An animation with a cursor moving through the color spectrogram in sync with the audio file is available at: http://www-pw.physics.uiowa.edu/cassini/.

The Cassini spacecraft began detecting these radio emissions in April 2002, when Cassini was 374 million kilometers (234 million miles) from the planet, using the Cassini radio and plasma wave science instrument.

The radio and plasma wave instrument has now provided the first high resolution observations of these emissions, showing an amazing array of variations in frequency and time. The complex radio spectrum with rising and falling tones, is very similar to Earth's auroral radio emissions. These structures indicate that there are numerous small radio sources moving along magnetic field lines threading the auroral region.

Time on this recording has been compressed, so that 73 seconds corresponds to 27 minutes. Since the frequencies of these emissions are well above the audio frequency range, we have shifted them downward by a factor of 44.

The Cassini-Huygens mission is a cooperative project of NASA, the European Space Agency and the Italian Space Agency. The Jet Propulsion Laboratory, a division of the California Institute of Technology in Pasadena, manages the mission for NASA's Science Mission Directorate, Washington, D.C. The Cassini orbiter was designed, developed and assembled at JPL. The radio and plasma wave science team is based at the University of Iowa, Iowa City.

For more information about the Cassini-Huygens mission, visit http://saturn.jpl.nasa.gov and the instrument team's home page, http://www-pw.physics.uiowa.edu/cassini/.