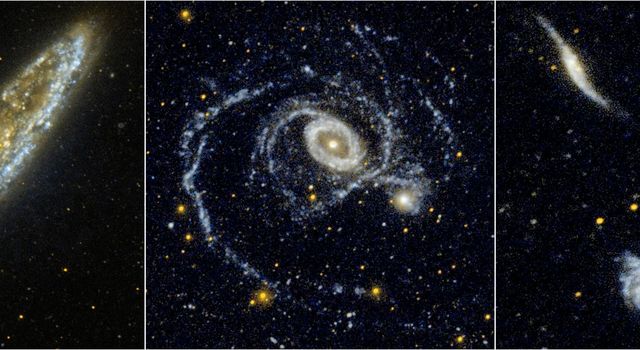 It's Not a Bird or a Plane

Galaxies aren't the only objects filling up the view of NASA's Galaxy Evolution Explorer. Since its launch in 2003, the space telescope -- originally designed to observe galaxies across the universe in ultraviolet light -- has discovered a festive sky blinking with flaring and erupting stars, as well as streaking asteroids, satellites and space debris. A group of six streaking objects -- the identities of which remain unknown -- can be seen here flying across the telescope's sight in this sped-up movie.

The two brightest objects appear to perform a sharp turn then travel in the reverse direction. This illusion is most likely the result of the Galaxy Evolution Explorer overtaking the objects as it orbits around Earth.

Careful inspection reveals four additional faint objects with the same timing and behavior. These faint objects are easiest to see during the retrograde portion of their paths. Three appear between the two bright sources, and one is above them, near the edge of the field of view.

These bonus objects are being collected in to public catalogues for other astronomers to study.