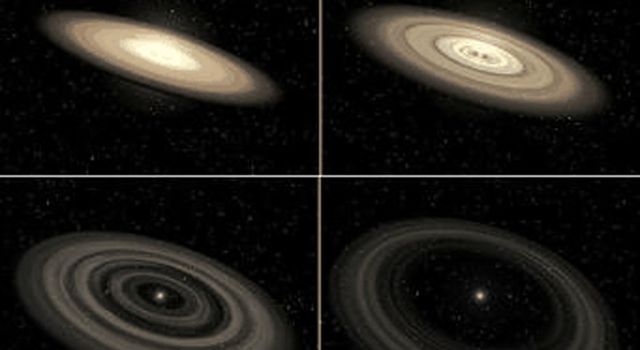 The Evolution of a Planet-Forming Disk (Artist's Concept Animation) 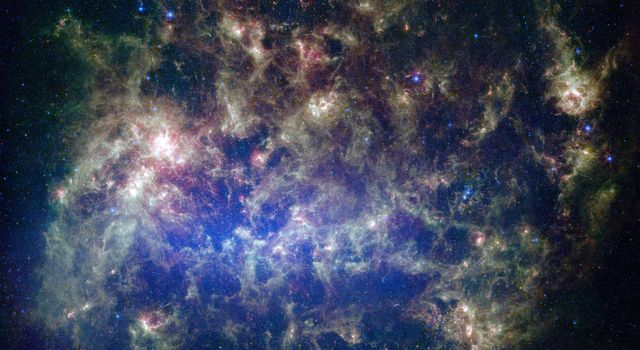 What's Old is New in the Large Magellanic Cloud

This vibrant image from NASA's Spitzer Space Telescope shows the Large Magellanic Cloud, a satellite galaxy to our own Milky Way galaxy.

The infrared image, a mosaic of more than 100,000 individual tiles, offers astronomers a unique chance to study the lifecycle of stars and dust in a single galaxy. Nearly one million objects are revealed for the first time in this Spitzer view, which represents about a 1,000-fold improvement in sensitivity over previous space-based missions. Most of the new objects are dusty stars of various ages populating the Large Magellanic Cloud; the rest are thought to be background galaxies.

The blue color in the picture, seen most prominently in the central bar, represents starlight from older stars. The chaotic, bright regions outside this bar are filled with hot, massive stars buried in thick blankets of dust. The red clouds contain cooler interstellar gas and molecular-sized dust grains illuminated by ambient starlight.

The Large Magellanic Cloud, located 160,000 light-years from Earth, is one of a handful of dwarf galaxies that orbit our own Milky Way. It is approximately one-third as wide as the Milky Way, and, if it could be seen in its entirety, would cover the same amount of sky as a grid of about 480 full moons. About one-third of the whole galaxy can be seen in the Spitzer image.

This picture is a composite of infrared light captured by Spitzer's infrared array camera. Light with wavelengths of 8 and 5.8 microns is red and orange: 4.5-micron light is green; and 3.6-micron light is blue.