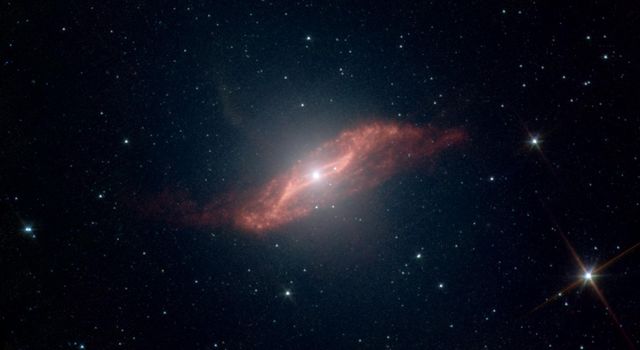 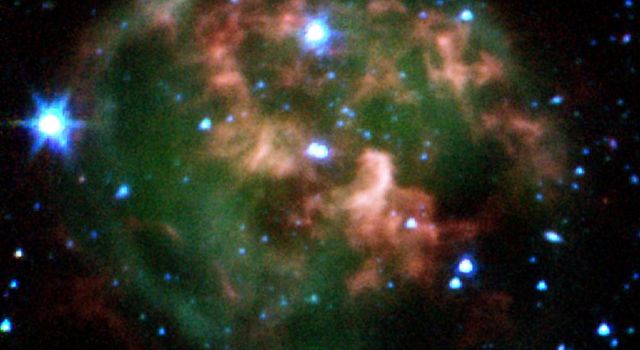 NASA's Spitzer Space Telescope has captured these infrared images of a nearby spiral galaxy that resembles our own Milky Way. The targeted galaxy, known as NGC 7331 and sometimes referred to as our galaxy's twin, is found in the constellation Pegasus at a distance of 50 million light-years. This inclined galaxy was discovered in 1784 by William Herschel, who also discovered infrared light.

The evolution of this galaxy is a story that depends significantly on the amount and distribution of gas and dust, the locations and rates of star formation, and on how the energy from star formation is recycled by the local environment. The new Spitzer images are allowing astronomers to "read" this story by dissecting the galaxy into its separate components.

The image, measuring 12.6 by 8.2 arcminutes, was obtained by Spitzer's infrared array camera. It is a four-color composite of invisible light, showing emissions from wavelengths of 3.6 microns (blue), 4.5 microns (green), 5.8 microns (yellow) and 8.0 microns (red). These wavelengths are roughly 10 times longer than those seen by the human eye.

The infrared light seen in this image originates from two very different sources. At shorter wavelengths (3.6 to 4.5 microns), the light comes mainly from stars, particularly ones that are older and cooler than our Sun. This starlight fades at longer wavelengths (5.8 to 8.0 microns), where instead we see the glow from clouds of interstellar dust. This dust consists mainly of a variety of carbon-based organic molecules known collectively as polycyclic aromatic hydrocarbons. Wherever these compounds are found, there will also be dust granules and gas, which provide a reservoir of raw materials for future star formation.

One feature that stands out in the Spitzer image is the ring of actively forming stars that surrounds the galaxy center (yellow). This ring, with a radius of nearly 20,000 light-years, is invisible at shorter wavelengths, yet has been detected at sub-millimeter and radio wavelengths. It is made up in large part of polycyclic aromatic hydrocarbons. Spitzer measurements suggest that the ring contains enough gas to produce four billion stars like the Sun.

Three other galaxies are seen below NGC 7331, all about 10 times farther away. From left to right are NGC 7336, NGC 7335 and NGC 7337. The blue dots scattered throughout the images are foreground stars in the Milky Way; the red ones are galaxies that are even more distant.

The Spitzer observations of NGC 7331 are part of a large 500-hour science project, known as the Spitzer Infrared Nearby Galaxy Survey, which will comprehensively study 75 nearby galaxies with infrared imaging and spectroscopy.