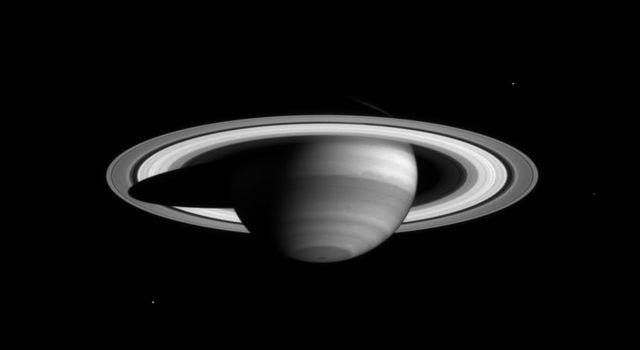 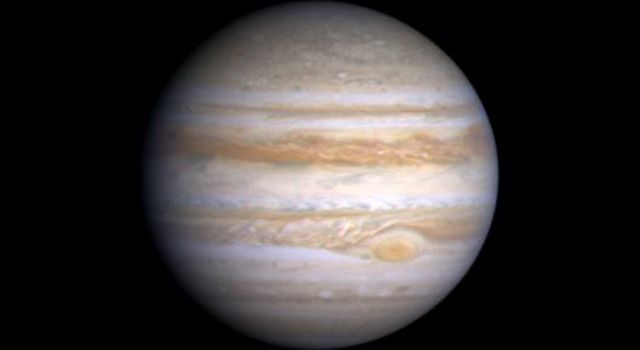 The narrow angle camera onboard the Cassini spacecraft took a series of exposures of Saturn and its rings and moons on February 9, 2004, which were composited to create this stunning, color image. At the time, Cassini was 69.4 million kilometers (43.1 million miles) from Saturn, less than half the distance from Earth to the Sun. The image contrast and colors have been slightly enhanced to aid visibility. The smallest features visible in this image are approximately 540 kilometers across (336 miles).

Fine details in the rings and atmosphere are beginning to emerge, and will grow in sharpness and clarity over the coming months. The optical thickness of Saturn's B (middle) ring and the comparative translucence of the A (outer) ring, when seen against the planet, are now apparent. Subtle color differences in the finely banded Saturnian atmosphere, as well as structure within the diaphanous, inner C ring can be easily seen. Noticeably absent are the ghostly spoke-like dark markings in Saturn's B ring, first discovered by NASA's Voyager spacecraft on approach to the planet 23 years ago.

The icy moon Enceladus (520 kilometers or 323 miles across) is faintly visible on the left in the image. Its brightness has been increased seven times relative to the planet. Cassini will make several very close approaches to Enceladus, returning images in which features as small as 50 meters (165 feet) or less will be detectable.

The composite image signals the start of Cassini's final approach to the ringed planet and the beginning of monitoring and data collection on Saturn and its environment. This phase of the mission will continue until Cassini enters orbit around Saturn on July 1, 2004. The Cassini-Huygens mission is a cooperative project of NASA, the European Space Agency and the Italian Space Agency. The Jet Propulsion Laboratory, a division of the California Institute of Technology in Pasadena, manages the Cassini mission for NASA's Office of Space Science, Washington, D.C.