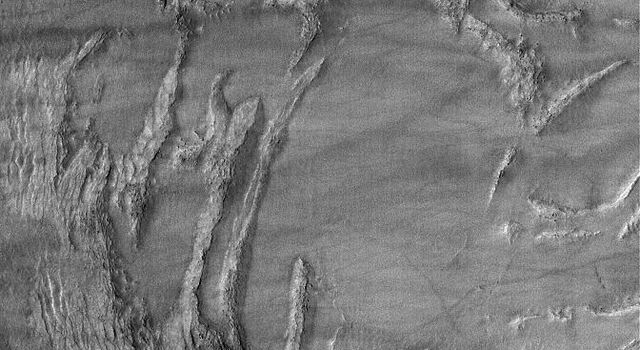 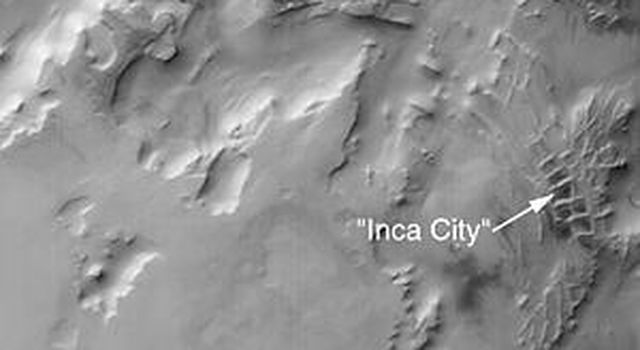 'Inca City' is Part of a Circular Feature

What does Earth look like when viewed from Mars? At 13:00 GMT on 8 May 2003, the Mars Global Surveyor (MGS) Mars Orbiter Camera (MOC) had an opportunity to find out. In addition, a fortuitous alignment of Earth and Jupiter--the first planetary conjunction viewed from another planet--permitted the MOC to acquire an image of both of these bodies and their larger satellites. At the time, Mars and the orbiting camera were 139 million kilometers (86 million miles) from Earth and almost 1 billion kilometers (nearly 600 million miles) from Jupiter. The orbit diagram shows the geometry at the time the images were obtained.

Because Jupiter is over 5 times farther from the Sun than Earth, two different exposures were needed to image the two planets. The images are shown mosaiced together. The composite has been highly contrast-enhanced and "colorized" to show both planets and their satellites. The MGS MOC high resolution camera only takes grayscale (black-and-white) images; the color was derived from Mariner 10 and Cassini pictures of Earth/Moon and Jupiter, respectively, as described in the note below.

Earth/Moon: This is the first image of Earth ever taken from another planet that actually shows our home as a planetary disk. Because Earth and the Moon are closer to the Sun than Mars, they exhibit phases, just as the Moon, Venus, and Mercury do when viewed from Earth. As seen from Mars by MGS on 8 May 2003 at 13:00 GMT (6:00 AM PDT), Earth and the Moon appeared in the evening sky. The MOC Earth/Moon image has been specially processed to allow both Earth (with an apparent magnitude of -2.5) and the much darker Moon (with an apparent magnitude of +0.9) to be visible together. The bright area at the top of the image of Earth is cloud cover over central and eastern North America. Below that, a darker area includes Central America and the Gulf of Mexico. The bright feature near the center-right of the crescent Earth consists of clouds over northern South America. The image also shows the Earth-facing hemisphere of the Moon, since the Moon was on the far side of Earth as viewed from Mars. The slightly lighter tone of the lower portion of the image of the Moon results from the large and conspicuous ray system associated with the crater Tycho.

Jupiter/Galilean Satellites: When Galileo first turned his telescope toward Jupiter four centuries ago, he saw that the giant planet had four large satellites, or moons. These, the largest of dozens of moons that orbit Jupiter, later became known as the Galilean satellites. The larger two, Callisto and Ganymede, are roughly the size of the planet Mercury; the smallest, Io and Europa, are approximately the size of Earth's Moon. This MGS MOC image, obtained from Mars orbit on 8 May 2003, shows Jupiter and three of the four Galilean satellites: Callisto, Ganymede, and Europa. At the time, Io was behind Jupiter as seen from Mars, and Jupiter's giant red spot had rotated out of view. This image has been specially processed to show both Jupiter and its satellites, since Jupiter, at an apparent magnitude of -1.8, was much brighter than the three satellites.

A note about the coloring process: The MGS MOC high resolution camera only takes grayscale (black-and-white) images. To "colorize" the image, a Mariner 10 Earth/Moon image taken in 1973 was used to color the MOC Earth and Moon picture, and a recent Cassini image acquired during its Jupiter flyby was used to color the MOC Jupiter picture. The procedure used was as follows: the Mariner 10 and Cassini color images were converted from 24-bit color to 8-bit color using a JPEG to GIF conversion program. These 8-bit color images were converted to 8-bit grayscale and an associated lookup table mapping each gray value of that image to a red-green-blue color triplet (RGB). Each color triplet was root-sum-squared (RSS), and sorted in increasing RSS value. These sorted lists were brightness-to-color maps for their respective images. Each brightness-to-color map was then used to convert the 8-bit grayscale MOC image to an 8-bit color image. This 8-bit color image was then converted to a 24-bit color image. The color image was edited to return the background to black. Three separate color tables were used: one each for the Earth, Moon and Jupiter. Jupiter's Galilean Satellites were not colored.