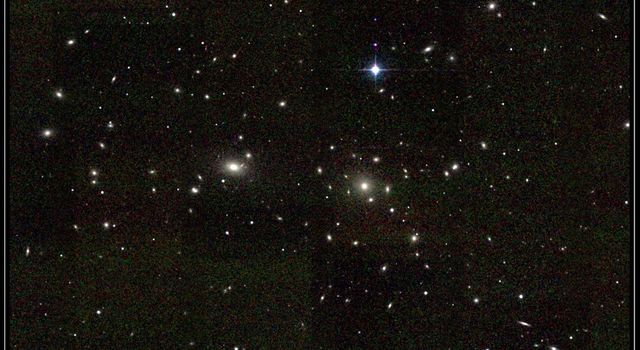 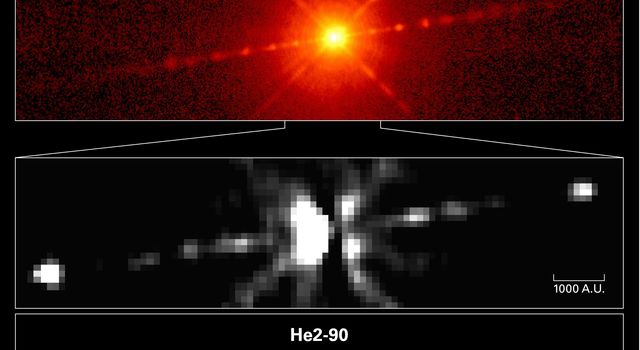 The image, taken by Hubble's Wide Field and Planetary Camera 2 (WFPC2), is online at http://hubblesite.org/newscenter/archive/releases/http://hubblesite.org/newscenter/arc hive/releases/2001/23/image/a/. The camera was designed and built by NASA's Jet Propulsion Laboratory, Pasadena, Calif. During observations of the galaxy, the camera passed a milestone, taking its 100,000th image since shuttle astronauts installed it in Hubble in 1993.

The dust and spiral arms of normal spiral galaxies, like our Milky Way, look flat when seen edge- on. The new image of the galaxy ESO 510-G13 shows an unusual twisted disc structure, first seen in ground-based photographs taken at the European Southern Observatory in Chile. ESO 510-G13 lies in the southern constellation Hydra, some 150 million light-years from Earth. Details of the galaxy's structure are visible because interstellar dust clouds that trace its disc are silhouetted from behind by light from the galaxy's bright, smooth central bulge.

The strong warping of the disc indicates that ESO 510-G13 has recently collided with a nearby galaxy and is in the process of swallowing it. Gravitational forces distort galaxies as their stars, gas, and dust merge over millions of years. When the disturbances die out, ESO 510-G13 will be a single galaxy.

The galaxy's outer regions, especially on the right side of the image, show dark dust and bright clouds of blue stars. This indicates that hot, young stars are forming in the twisted disc. Astronomers believe star formation may be triggered when galaxies collide and their interstellar clouds are compressed.

The Hubble Heritage Team used WFPC2 to observe ESO 510-G13 in April 2001. Pictures obtained through blue, green, and red filters were combined to make this color-composite image, which emphasizes the contrast between the dusty spiral arms, the bright bulge, and the blue star-forming regions. Additional information about the Hubble Space Telescope is available athttp://www.stsci.edu/hst/. More information about the Wide Field and Planetary Camera 2 is available at http://www.stsci.edu/hst/wfpc2.

The Space Telescope Science Institute, Baltimore, Md., manages space operations for Hubble for NASA's Office of Space Science, Washington, D.C. The institute is operated by the Association of Universities for Research in Astronomy, Inc., for NASA, under contract with the Goddard Space Flight Center, Greenbelt, Md. Hubble is a project of international cooperation between NASA and the European Space Agency. JPL is a division of the California Institute of Technology in Pasadena.