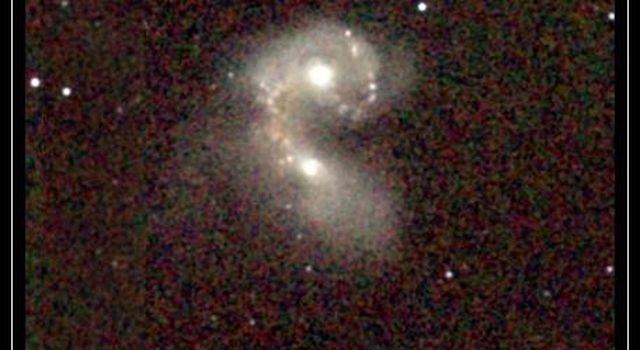 Aitoff projection of the three-color composite JHKs source count map of the entire sky, based on 95,851,173 stars with Ks 13.5. What appears most prominently are the Galactic plane and the Galactic bulge. The plane is cut by dark dust lanes and clouds, even in the near-infrared, and several dusty regions, including Orion, are conspicuous. One can also see the two Magellanic Clouds, Large and Small. (Note the prominent bar and incipient spiral structure of the Large Cloud.) Near the Small Magellanic Cloud is the globular cluster 47 Tucanae. Cutting almost north-south through one side of the bulge is the dwarf Sagittarius galaxy, which, along with the Clouds, is a satellite of the Milky Way. 2MASS has completed the observational part of the survey and is now preparing to reprocess all of the data for a Final public Release, in late 2002. The source generation was performed by M.F. Skrutskie (UMass; Principal Investigator, 2MASS), the flux maps were compiled by J.M. Carpenter (Caltech), and the color composite was assembled by R. Hurt (IPAC/Caltech). It is this composite flux map that comprises the new 2MASS logo, seen above.