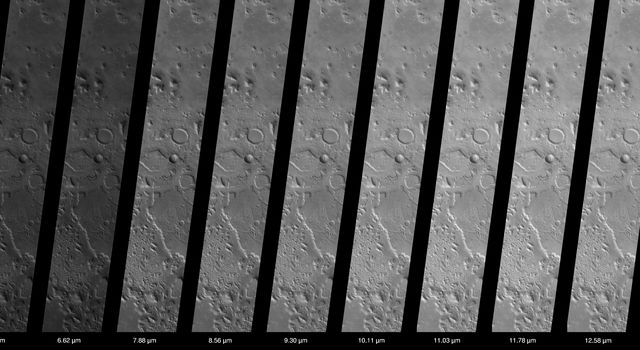 The So-Called "Face on Mars" in Infrared 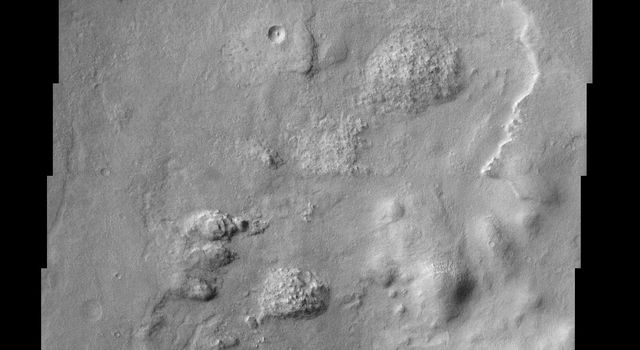 (Released 25 July 2002)
The lineations seen in this THEMIS visible image occur in Acidalia Planitia, and create what is referred to as "patterned ground" or "polygonal terrain." The lineations are fissures, or cracks in the ground and are possibly evidence that there was once subsurface ice or water in the region. On Earth, similar features occur when ice or water is removed from the subsurface. The removal of material causes the ground to slump, and the surface expression of this slumping is the presence of these fissures, which tend to align themselves along common orientations, and in some cases, into polygonal shapes. There are other hypotheses, not all of which involve liquid or frozen water, regarding the formation of patterned ground. Desiccation of wet soils on Earth forms mud cracks, which are similar in appearance to the martian features, but occur on a much smaller scale. Alternatively, oriented cracks form when lava flows cool. The cracks formed by this process would be on about the same scale as those seen in this image.

The best example of polygonal terrain occurs about halfway down the image. The largest fractures, as in other places in the image, run from the lower left to the upper right of the image. In some cases, though, smaller fractures occur in other orientations, creating the polygonal terrain. Scientists have been aware of these features on the surface of Mars since the Viking era, but the THEMIS visible camera will allow scientists to map these features at higher resolution with more coverage over the high latitude regions where they are most common, perhaps giving further insight into the mechanism(s) of their formation.
View all Images