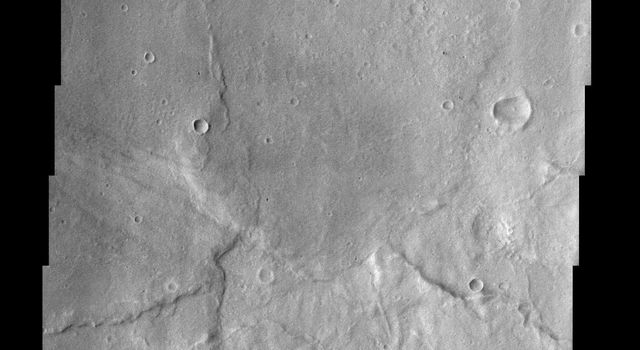 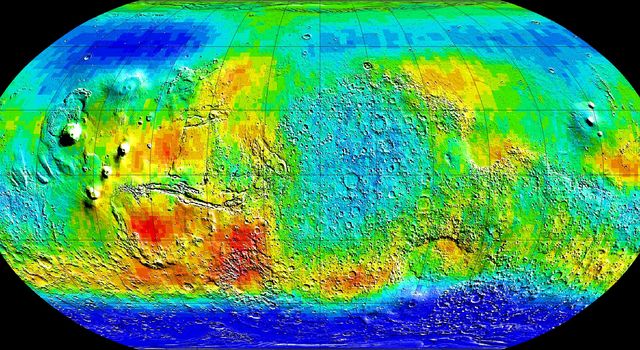 (Released 20 May 2002)
The Science
This THEMIS visible image shows a portion of the summit region of Arsia Mons, one of the four giant volcanoes in the Tharsis region of Mars. This volcano stands over 20 km above the surrounding plains, and is approximately 450 km in diameter at its base. A large volcanic crater known as a "caldera" is located at the summit of all of the Tharsis volcanoes. These calderas are produced by massive volcanic explosions and collapse. The Arsia Mons summit caldera alone is over 120 km in diameter, making it larger than many volcanoes on Earth. The THEMIS image shows a portion of the eastern wall of the caldera, revealing the steep walls and linear features associated with the collapse that formed the caldera. The ridge with linear faults that extends from the lower left toward the center right was formed at some stage during a collapse event. Several circular pits are present, and several of these pits appear to have coalesced into a long, unusual trough. These pits and troughs likely formed when lava was removed from beneath them and the overlying surface collapsed. Numerous lava flows can be seen on the floor of the caldera. Many of these flows occurred after the collapse that formed the caldera crater, and have buried many of the pre-existing features. The faulted, pitted ridge appears to have been partially flooded by these lava flows, indicating that the caldera of Arsia Mons has undergone a complex history of numerous events. The wispy bright features throughout the image are water-ice clouds that commonly form over the volcano summits during the early northern spring when this image was acquired.

The Story
When the Martian volcano Arsia Mons exploded long ago, it sent lava spewing out everywhere. With the removal of this molten material, the volcano then collapsed at its opening (the top of its cone) to form a sunken volcanic crater known as a caldera. You can see it more fully in the context image to the right.

The eastern wall of the caldera is the pale white strip running diagonally across the bottom third of the image. By looking at this steep wall and the streaks running down its sides, you can imagine how all of the remaining material rushed down into the void left by expelled magma and ash to form the caldera depression. Numerous lava flows that occurred after the collapse texturize the floor of the caldera, and have buried many of its pre-existing features.

These later lava flows might be a little harder to see, because wispy bright features blur this image slightly, giving it an almost marbled, hazy appearance. They are water-ice clouds that typically form over the volcano summits during the early northern spring. What they don't obscure very much is the raised ridge created during the collapse of the volcano's cone (running slightly north of the caldera wall along the same diagonal).

Draped across the smoother caldera floor, this pitted ridge has been partially flooded by lava flows, indicating quite a complex history of geologic events has taken place here. Faults cut through the ridge, contributing to its streamer-like appearance. And, in a process somewhat like the formation of the caldera itself, all of the round and oblong pits and troughs in the ridge formed when lava was removed from underneath these areas, and the overlying surface then collapsed.

Arsia Mons is one of the four giant Martian volcanoes found in a region called Tharsis. Arsia Mons is about 270 miles wide in diameter at its base, and rises 12 miles high above the surrounding plains. The caldera at its summit is more than 72 miles wide, making it larger than volcanoes on Earth. By comparison, the largest volcano on Earth is Mauna Loa on the island of Hawaii, which is about 6.3 miles high and 75 miles wide in diameter at its base.
View all Images