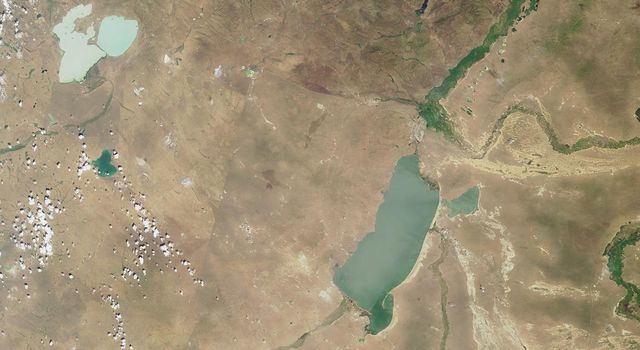 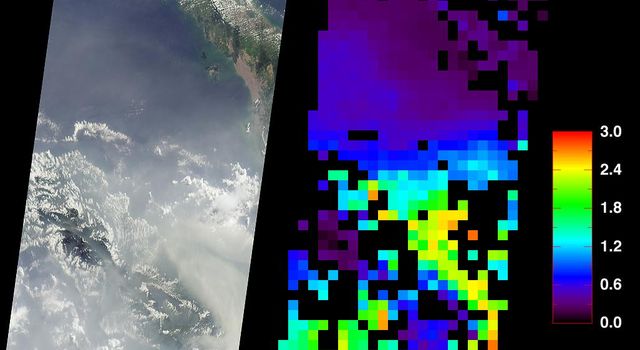 The Thwaites Ice Tongue is a large sheet of glacial ice extending from the West Antarctic mainland into the southern Amundsen Sea. A large crack in the Thwaites Tongue was discovered in imagery from Terra's Moderate Resolution Imaging SpectroRadiometer (MODIS). Subsequent widening of the crack led to the calving of a large iceberg. The development of this berg, designated B-22 by the National Ice Center, can be observed in these images from the Multi-angle Imaging SpectroRadiometer, also aboard Terra. The two views were acquired by MISR's nadir (vertical-viewing) camera on March 10 and 24, 2002.

The B-22 iceberg, located below and to the left of image center, measures approximately 82 kilometers long x 62 kilometers wide. Comparison of the two images shows the berg to have drifted away from the ice shelf edge. The breakup of ice near the shelf edge, in the area surrounding B-22, is also visible in the later image.

These natural-color images were acquired during Terra orbits 11843 and 12047, respectively. At the right-hand edge is Pine Island Bay, where the calving of another large iceberg (B-21) occurred in November 2001. B-21 subsequently split into two smaller bergs, both of which are visible to the right of B-22.

Antarctic researchers have reported an increase in the frequency of iceberg calvings in recent years. Whether this is the result of a regional climate variation, or connected to the global warming trend, has not yet been established.