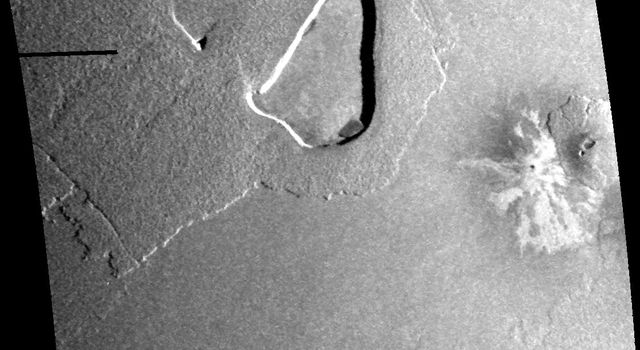 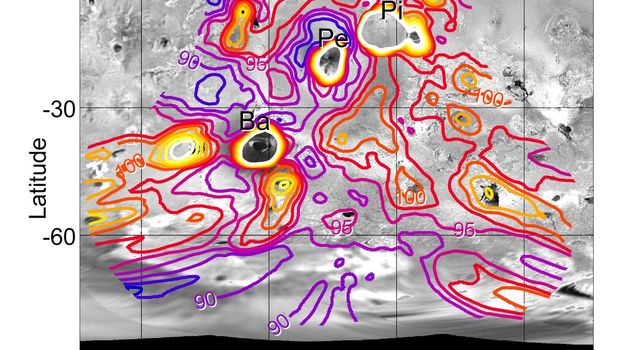 Dramatic shadows across a mountainous landscape on Jupiter's moon Io reveal details of the topography around a peak named Tohil Mons in this mosaic created from images taken by NASA's Galileo spacecraft in October 2001.

Tohil Mons rises 5.4 kilometers (18,000 feet) above Io's surface, according to analysis of stereo imaging from earlier Galileo flybys of Io. The new images, with a resolution of 327 meters (1,070 feet) per picture element, were taken when the Sun was low in the sky, producing informative shadows. North is to the top and the Sun illuminates the surface from the upper right. The topographic features revealed include a very straight ridge extending southwest from the peak, 500- to 850-meter-high (1,640- to 2,790-foot-high) cliffs to the northwest and a curious pit immediately east of the peak.

Major questions remain about how Io's mountains form and how they are related to Io's ubiquitous volcanoes. Although Io is extremely active volcanically, few of its mountains appear to be volcanoes. However, two volcanic craters do lie directly to the northeast of Tohil's peak, a smaller dark-floored one and a larger one at the very edge of the mosaic. Furthermore, the shape of the pit directly east of the peak suggests a volcanic origin. Galileo scientists will use these images to investigate the geologic history of Tohil Mons and its relationship to the neighboring volcanic features.

The image is centered at 28 degrees south latitude and 161 degrees west longitude.

The Jet Propulsion Laboratory, a division of the California Institute of Technology in Pasadena, manages the Galileo mission for NASA's Office of Space Science, Washington, D.C. Additional information about Galileo and its discoveries is available on the Galileo mission home page at http://solarsystem.nasa.gov/galileo/. Background information and educational context for the images can be found at http://galileo.jpl.nasa.gov/gallery/io.cfm.