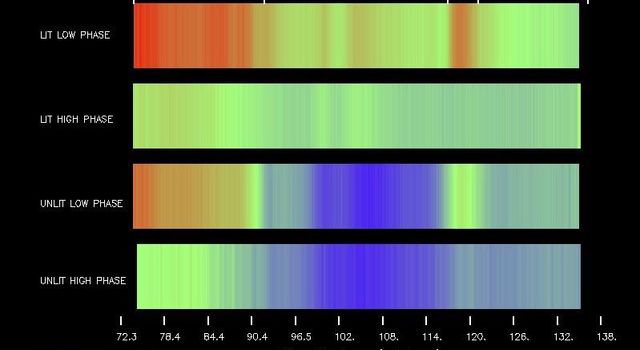 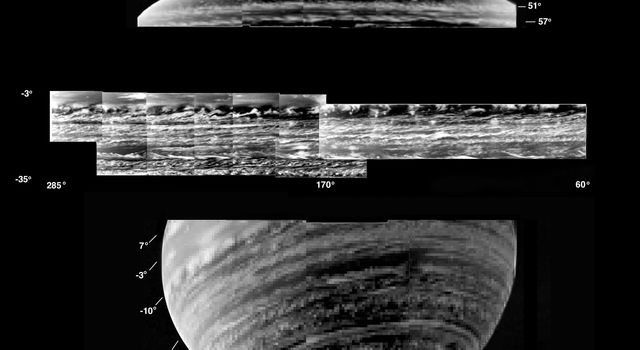 A Gallery of Views of Saturn's Deep Clouds

The Cassini composite infrared spectrometer obtained temperature maps of Saturn's main rings (A, B and C) that showed ring temperatures decreasing with increasing solar phase angle (the change of the sun-spacecraft-ring angle) on both the lit and unlit sides of the rings.

Temperature changes throughout Saturn's main rings, as measured by the instrument, indicate that Saturn ring particles spin slowly compared to their orbital periods of 6 to 14 hours. They may spin several times per orbit to less than one time per orbit.

The thermal characteristics of each main ring vary noticeably with phase angle. Radial scans of the A, B and C rings show a decrease in temperature with increasing phase angle for both the lit and unlit sides of the rings.

The C ring and Cassini Division exhibit the largest change in temperature. The temperature of the lit C ring decreases by about 22 degrees (12 Kelvin) between low and high phase angles. A similar contrast is present for the unlit side of the C ring. The C ring and Cassini Division are darker than the A and B rings so they can absorb more heat from the Sun. The lit B ring shows a temperature contrast of approximately 18 degrees (10 K) while the unlit B ring shows very little thermal contrast. Very little sunlight may make it through the thick B ring to its unlit side. The lit A ring is particularly interesting because the magnitude of the thermal contrast decreases with increasing radial distance from Saturn. The outer A ring shows only a small temperature change with phase angle, possibly because it contains smaller, or more rapidly rotating ring particles, which would have more uniform temperatures with phase angle.

The Cassini-Huygens mission is a cooperative project of NASA, the European Space Agency and the Italian Space Agency. The Jet Propulsion Laboratory, a division of the California Institute of Technology in Pasadena, manages the mission for NASA's Science Mission Directorate, Washington, D.C. The Cassini orbiter was designed, developed and assembled at JPL. The composite infrared spectrometer team is based at NASA's Goddard Space Flight Center, Greenbelt, Md.

For more information about the Cassini-Huygens mission visit, http://saturn.jpl.nasa.gov and the instrument team's home page, http://cirs.gsfc.nasa.gov/.