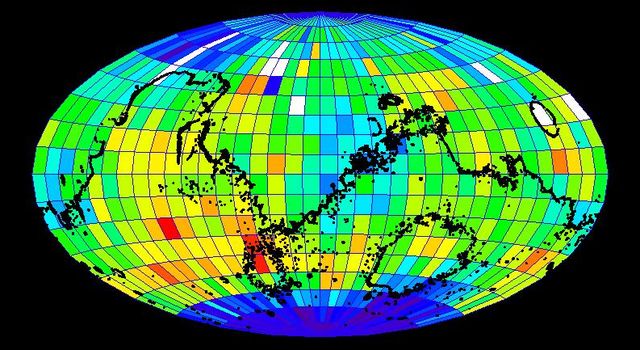 The Barringer Meteorite Crater (also known as "Meteor Crater") is a gigantic hole in the middle of the arid sandstone of the Arizona desert. A rim of smashed and jumbled boulders, some of them the size of small houses, rises 50 m above the level of the surrounding plain. The crater itself is nearly a 1500 m wide, and 180 m deep. When Europeans first discovered the crater, the plain around it was covered with chunks of meteoritic iron - over 30 tons of it, scattered over an area 12 to 15 km in diameter. Scientists now believe that the crater was created approximately 50,000 years ago. The meteorite which made it was composed almost entirely of nickel-iron, suggesting that it may have originated in the interior of a small planet. It was 50 m across, weighed roughly 300,000 tons, and was traveling at a speed of 65,000 km per hour. This ASTER 3-D perspective view was created by draping an ASTER bands 3-2-1image over a digital elevation model from the US Geological Survey National Elevation Dataset.

This image was acquired on May 17, 2001 by the Advanced Spaceborne Thermal Emission and Reflection Radiometer (ASTER) on NASA's Terra satellite. With its 14 spectral bands from the visible to the thermal infrared wavelength region, and its high spatial resolution of 15 to 90 meters (about 50 to 300 feet), ASTER will image Earth for the next 6 years to map and monitor the changing surface of our planet.

ASTER is one of five Earth-observing instruments launched December 18,1999, on NASA's Terra satellite. The instrument was built by Japan's Ministry of Economy, Trade and Industry. A joint U.S./Japan science team is responsible for validation and calibration of the instrument and the data products. Dr. Anne Kahle at NASA's Jet Propulsion Laboratory, Pasadena, California, is the U.S. Science team leader; Bjorn Eng of JPL is the project manager. ASTER is the only high resolution imaging sensor on Terra. The Terra mission is part of NASA's Earth Science Enterprise, along-term research and technology program designed to examine Earth's land, oceans, atmosphere, ice and life as a total integrated system.