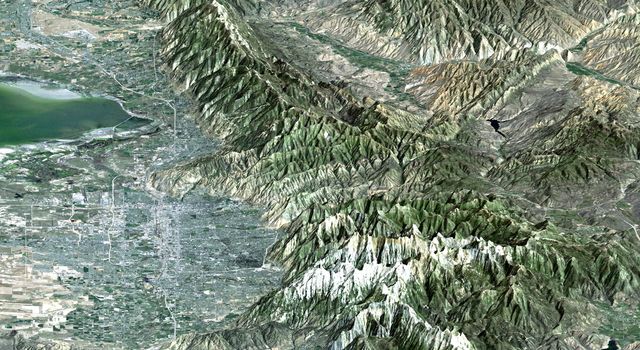 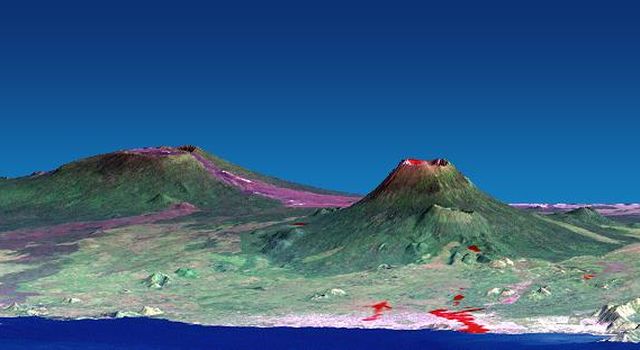 The Nyiragongo volcano in the Congo erupted on January 17, 2002, and subsequently sent streams of lava into the city of Goma on the north shore of Lake Kivu. More than 100 people were killed, more than 12,000 homes were destroyed, and hundreds of thousands were forced to flee the broader community of nearly half a million people. This Landsat satellite image shows the volcano (right of center), the city of Goma, and surrounding terrain. Image data from the Advanced Spaceborne Thermal Emission and Reflection Radiometer (ASTER) on NASA's Terra satellite were used to supply a partial map of the recent lava flows (red overlay), including a complete mapping of their intrusion into Goma as of January 28, 2002. Lava is also apparent within the volcanic crater and at a few other locations. Thick (but broken) cloud cover during the ASTER image acquisition prevented a complete mapping of the lava distribution, but future image acquisitions should complete the mapping.

Goma has a light pink speckled appearance along the shore of Lake Kivu. The city airport parallels, and is just right (east) of, the larger lava flow. Nyiragongo peaks at about 3,470 meters (11,380 feet) elevation and reaches almost exactly 2,000 meters (6,560 feet) above Lake Kivu. The shorter but much broader Nyamuragira volcano appears in the upper left.

Goma, Lake Kivu, Nyiragongo, Nyamuragira and other nearby volcanoes sit within the East African Rift Valley, a zone where tectonic processes are cracking, stretching, and lowering the Earth's crust. Volcanic activity is common here, and older but geologically recent lava flows (magenta in this depiction) are particularly apparent on the flanks of the Nyamuragira volcano.

The Landsat image used here was acquired on December 11, 2001, about a month before the eruption, and shows an unusually cloud-free view of this tropical terrain. Minor clouds and their shadows were digitally removed to clarify the view and topographic shading derived from the SRTM elevation model was added to the Landsat image. Landsat has been providing visible and infrared views of the Earth since 1972. SRTM elevation data matches the 30-meter (98-foot) resolution of most Landsat images and substantially helps in analyzing the large and growing Landsat image archive. This Landsat 7 Thematic Mapper image was provided to the SRTM and ASTER projects by the United States Geological Survey, Earth Resources Observation Systems (EROS) Data Center, Sioux Falls, S.D.

With its 14 spectral bands from the visible to the thermal infrared wavelength region, and its high spatial resolution of 15 to 90 meters (about 50 to 300 feet), the Advanced Spaceborne Thermal Emission and Reflection Radiometer (ASTER) will image Earth for several years to map and monitor the changing surface of our planet. ASTER is one of five Earth-observing instruments launched December 18, 1999, on NASA's Terra satellite. The instrument was built by Japan's Ministry of Economy,Trade and Industry. A joint U.S./Japan science team is responsible for validation and calibration of the instrument and the data products. ASTER is providing scientists in numerous disciplines with critical information for surface mapping and monitoring dynamic conditions and temporal change.

Elevation data used in this image was acquired by the Shuttle Radar Topography Mission (SRTM) aboard the Space Shuttle Endeavour, launched on February 11, 2000. SRTM used the same radar instrument that comprised the Spaceborne Imaging Radar-C/X-Band Synthetic Aperture Radar (SIR-C/X-SAR) that flew twice on the Space Shuttle Endeavour in 1994. SRTM was designed to collect 3-D measurements of the Earth's surface. To collect the 3-D data, engineers added a 60-meter (approximately 200-foot) mast, installed additional C-band and X-band antennas, and improved tracking and navigation devices. The mission is a cooperative project between NASA, the National Imagery and Mapping Agency (NIMA) of the U.S. Department of Defense and the German and Italian space agencies. It is managed by NASA's Jet Propulsion Laboratory, Pasadena, Calif., for NASA's Earth Science Enterprise,Washington, D.C.