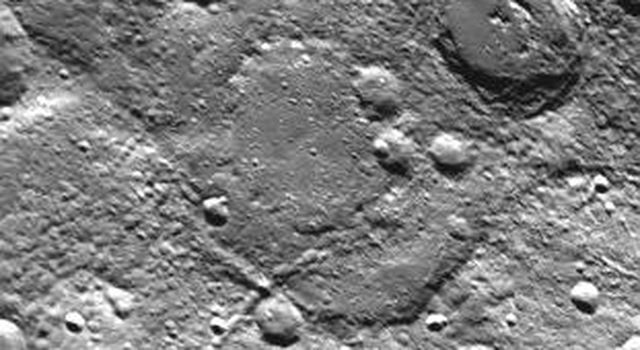 Mercury's south pole was photographed by one of Mariner 10's TV cameras as the spacecraft made its second close flyby of the planet September 21. The pole is located inside the large crater (180 kilometers, 110 miles) on Mercury's limb (lower center). The crater floor is shadowed and its far rim, illuminated by the sun, appears to de disconnected from the edge of the planet. Just above and to the right of the South Pole is a double ring basin about 100 kilometers (125 miles) in diameter. A bright ray system, splashed out of a 50 kilometer (30 mile) crater is seen at upper right. The stripe across the top is an artifact introduced during computer processing. The picture (FDS 166902) was taken from a distance of 85,800 kilometers (53,200 miles) less than two hours after Mariner 10 reached its closest point to the planet.