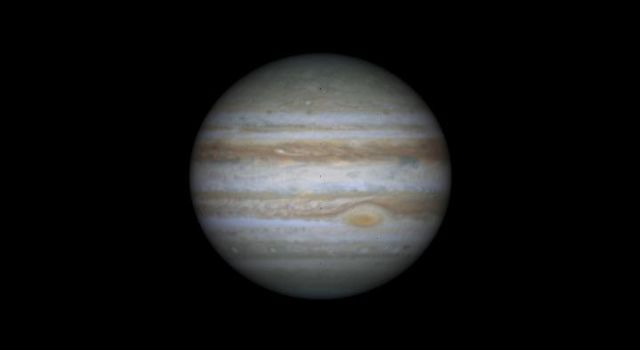 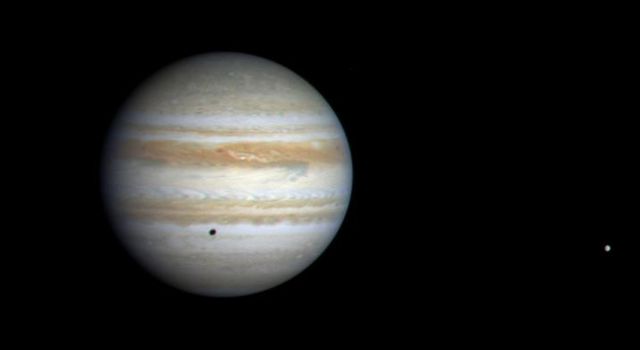 Jupiter in Color, by Cassini

Cassini's cameras come equipped with filters that sample three wavelengths where methane gas absorbs light. These are in the red at 619 nanometer (nm) wavelength and in the near-infrared at 727 nm and 890 nm. Absorption in the 619 nm filter is weak. It is stronger in the 727 nm band and very strong in the 890 nm band where 90 percent of the light is absorbed by methane gas. Light in the weakest band can penetrate the deepest into Jupiter's atmosphere. It is sensitive to the amount of cloud and haze down to the pressure of the water cloud, which lies at a depth where pressure is about 6 times the atmospheric pressure at sea level on the Earth). Light in the strongest methane band is absorbed at high altitude and is sensitive only to the ammonia cloud level and higher (pressures less than about one-half of Earth's atmospheric pressure) and the middle methane band is sensitive to the ammonia and ammonium hydrosulfide cloud layers as deep as two times Earth's atmospheric pressure.

The images shown here demonstrate the power of these filters in studies of cloud stratigraphy. The images cover latitudes from about 15 degrees north at the top down to the southern polar region at the bottom. The left and middle images are ratios, the image in the methane filter divided by the image at a nearby wavelength outside the methane band. Using ratios emphasizes where contrast is due to methane absorption and not to other factors, such as the absorptive properties of the cloud particles, which influence contrast at all wavelengths.

The most prominent feature seen in all three filters is the polar stratospheric haze that makes Jupiter bright near the pole. The equatorial band is also very bright in the strong 890-nm (right) image and to a lesser extent in the 727 band (middle image) but is subdued in the weak 619-nm image on the left. These are high, thin, haze layers that are nearly transparent at wavelengths outside the methane absorption bands. Another prominent feature is the Great Red Spot. About a third of it appears at the right-hand edge of the frame. It is a bright feature in methane absorption because it has extensive cloud cover reaching to high altitude. A wisp of high thin cloud can be seen trailing off its western rim in the middle and right images.

Features mentioned above have been seen from ground-based telescopes, from NASA's Hubble Space Telescope and from NASA's Galileo spacecraft. This is the first high-resolution image in all three methane bands, and a comparison of all three reveals some interesting features. Chief among these is the very dark patch seen in the left (weak methane) image near the top-middle of the frame. It is almost invisible in the right image and it appears to be composed of strands of bright clouds in the middle image. This is a region similar to the hot spot where the Galileo Probe entered Jupiter's atmosphere in 1995. These images indicate that cloud cover is present at the higher altitudes but absent from the lower altitudes. This is also what the Galileo Probe found when it entered Jupiter's atmosphere.

To the northwest (above and to the left) of the dark feature is a small cloud that is bright in the 619-nm (left) image but has no contrast at the other wavelengths. This is the signature expected for a thick water cloud. Another feature seen only in the weak-methane (left image) ratio is a dark ring near the center of the image. This feature is probably a counter-clockwise rotating, upwelling core surrounded by a sinking perimeter with diminished cloudiness. The fact that it is seen only in the weak methane ratio indicates the effects of a lower-level circulation that does not penetrated to the upper ammonia cloud level and may be confined to the deeper water cloud.

The opposite behavior is evident in an oval storm that appears dark in the middle and right images but is absent in the weak, 619-nm image. It is located to the southwest of the Great Red Spot. Further to the west at slightly more northerly latitudes are a series of small spots that are dark at all wavelengths. These and a myriad of other contrast features at many latitudes reveal much about Jupiter's complicated cloud structure and meteorology.