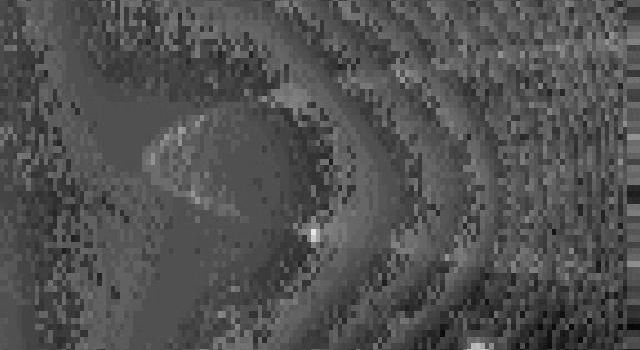 Movie of High Clouds on Jupiter

The first color movie of Jupiter from NASA's Cassini spacecraft shows what it would look like to peel the entire globe of Jupiter, stretch it out on a wall into the form of a rectangular map, and watch its atmosphere evolve with time.

Various patterns of motion are apparent all across Jupiter at the cloudtop level seen here. The Great Red Spot shows its counterclockwise rotation, and the uneven distribution of its high haze is obvious. To the east (right) of the Red Spot, oval storms, like ball bearings, roll over and pass each other. Horizontal bands adjacent to each other move at different rates. Strings of small storms rotate around northern-hemisphere ovals. The large grayish-blue "hot spots' at the northern edge of the white Equatorial Zone change over the course of time as they march eastward across the planet. Ovals in the north rotate counter to those in the south. Small, very bright features appear quickly and randomly in turbulent regions, candidates for lightning storms.

The clip consists of 14 unevenly spaced timesteps, each a true color cylindrical projection of the complete circumference of Jupiter, from 60 degrees south to 60 degrees north. The maps are made by first assembling mosaics of six images taken by Cassini's narrow-angle camera in the same spectral filter over the course of one Jupiter rotation and, consequently, covering the whole planet. Three such global maps -- in red, green and blue filters -- are combined to make one color map showing Jupiter during one Jovian rotation. Fourteen such maps, spanning 24 Jovian rotations at uneven time intervals comprise the movie. The maps were reduced in scale by a factor of two to make them accessible on the Internet at reasonable rates. Occasional appearances of Io, Europa, and their shadows have not been removed.

The smallest visible features at the equator are about 600 kilometers (about 370 miles) across. In a map of this nature, the most extreme northern and southern latitudes are unnaturally stretched out.