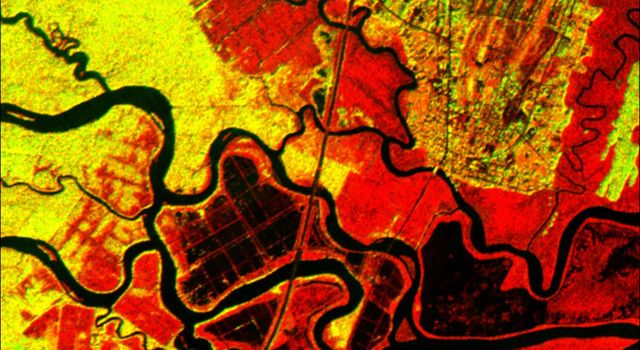 Island nations in the South Pacific Ocean experience natural disasters associated with typhoons, and with their proximity to the Pacific Ocean's "Ring of Fire." This radar image shows most of the northern coast of the island of Upolu in the nation of Western Samoa. Disaster managers use digital elevation models (DEMs) generated from radar data to assist in research toward disaster mitigation and management. Geologists also use DEM data of volcanic features, such as the line of circular craters in this image, to study eruption rates and volumes, and volcanic landform evolution. The capital of Western Samoa, Apia, is in the lower left of the image.

Angular black areas in the image are areas where steep topography causes holes in the data; these holes can be filled in by collecting data at other look directions. Color represents topography and intensity represents across-section of the radar backscatter. Since rough areas return more of the incident signal, they appear brighter on the image than relatively smooth areas, such as the ocean surface, along the left side of the image.

This image was collected during the Pacific Rim mission, a three-month mission from July to October 2000 that collected data at over 200 sites in eighteen countries and territories around the Pacific Rim. AIRSAR is managed by NASA's Jet Propulsion Laboratory, Pasadena, CA, for NASA's Earth Science Enterprise,Washington, D.C.