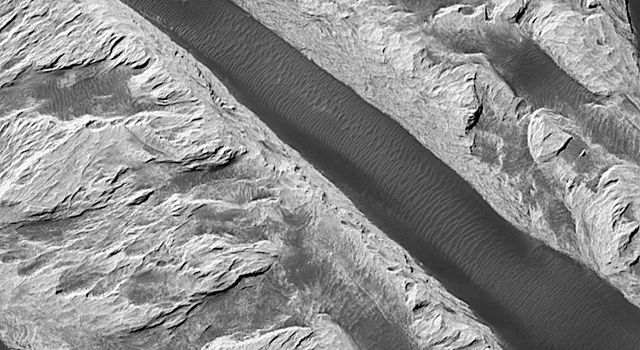 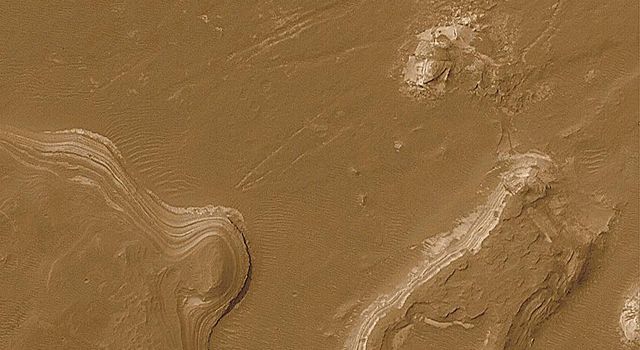 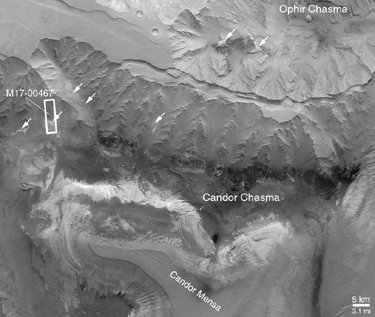 Valles Marineris a system of troughs, chasms, and pit chains that stretches more than 4,000 km (2,500 miles) across the martian western hemisphere. Outcrops of layered material found in mounds and mesas within the chasms of the Valles Marineris were known from the pictures taken by Mariner 9 in 1972 and the Viking orbiters of 1976-1980. One example of the those known previously is the mesa labeled "Candor Mensa" in the context image (above); another example is the mound in the center of Ganges Chasma. For several decades, it has been widely speculated among Mars scientists that the light- and dark-toned layered materials in the Valles Marineris might have formed in lakes that had once filled the chasms during the most recent epoch of martian history; others thought they might result from volcanic ash deposited in the chasms. Mars Global Surveyor (MGS) Mars Orbiter Camera (MOC) images have confirmed the presence of light- and dark-toned layered sedimentary rock outcrops in the Valles Marineris, but they have also revealed many more than were previously known and they have shown several good examples that these materials are coming out of the walls of the Valles Marineris chasms. The fact that these materials come out of the chasm walls means that the layers do not represent lakes (or volcanic debris) that formed in the Valles Marineris. Instead, they represent materials deposited and buried long before there ever was a Valles Marineris. They are seen now because of the faulting and erosion that opened up and widened the Valles Marineris troughs. The context image is a mosaic of Viking 1 orbiter images taken in 1976 showing a portion of the wall that separates western Ophir Chasma from western Candor Chasma in the Valles Marineris. This area is located around 5°S, 74°W. The white box labeled "M17-00467" shows the location of a subframe of MOC image M17-00467 that was acquired in July 2000 to allow scientists to examine one of the many bright patches (indicated by small arrows) seen on the walls of Valles Marineris. The release image is a subframe of MOC image M17-00467, showing a high-resolution view of one of the bright patches on the walls of Candor Chasma. The MOC image reveals that the bright material indeed consists of light-toned layered rock similar to other outcrops thought to be sedimentary in origin found throughout the Valles Marineris. The dark ridge running from top center to center-left in this view is mantled by a smooth, dark material that covers additional light-toned layered rock. The observation that these kinds of bright layered rock occur within the walls of the Valles Marineris indicate that the materials are very, very old. They have been buried under several kilometers (i.e., more than a mile) of additional layered rock, all of which is beneath plains thought to be more than 2.5 to 3.5 billion years old. These relationships suggest that all of the layered sedimentary rocks observed on Mars by MGS MOC may date back to the earliest parts of martian history, between 3.5 and 4.5 billion years ago. In both pictures, north is toward the top. Sunlight illuminates the context image from the top/right; the MOC image (top left) is illuminated from the upper left.