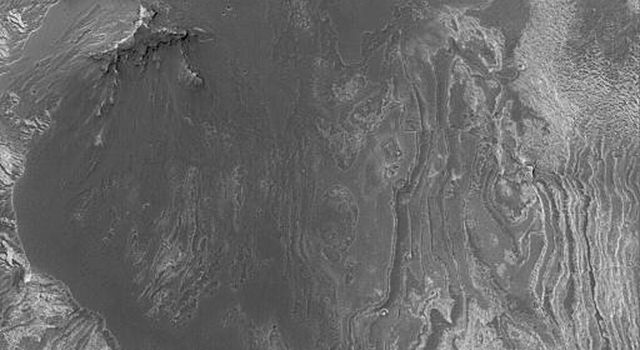 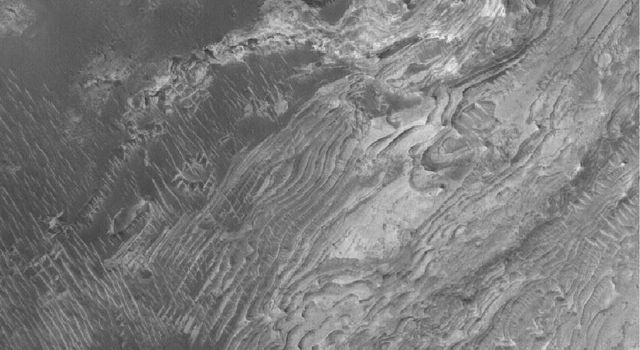 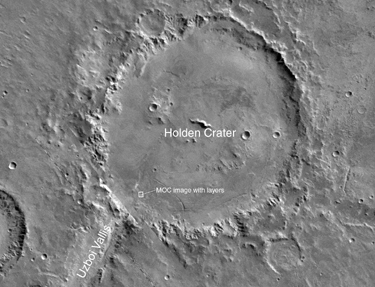 While many of the layered outcrops in craters and chasms on Mars are seen as stair-stepped series of cliffs and benches composed of similar materials with similar thicknesses, other layer outcrops are expressed on relatively smooth, rounded slopes as alternating light and dark bands. The best example of this variety of layered sedimentary material is found in southern Holden Crater. Holden is located at 26.5°S, 33.9°W, and has a diameter of 141 km (88 mi). The context picture above, shows that a valley, Uzboi Vallis, enters the crater on its southwestern side. Not too far from where Uzboi Vallis meets Holden Crater, rounded slopes and buttes consisting of alternating light and dark bands are seen. The origin of these layers is not known, but like those found in other craters on Mars, they might have resulted from deposition of sediment in a lake that would have occupied Holden Crater. Alternatively, these are materials deposited by falling out of the air, the same way that volcanic ash is deposited on Earth. The Viking mosaic (above) images are illuminated by sunlight from the upper right. The MOC image (top left) is illuminated from the upper left. North is up.