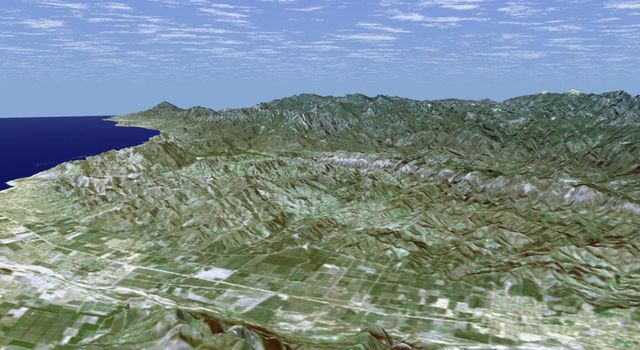 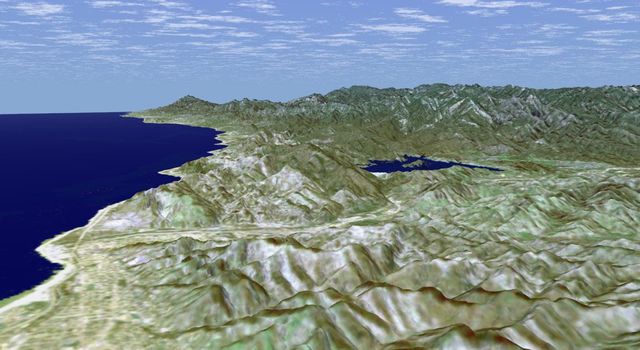 Ask any astronomer where the best stargazing site in Southern California is, and chances are they'll say Mt. Pinos. In this perspective view generated from SRTM elevation data the snow-capped peak is seen rising to an elevation of 2,692 meters (8,831 feet), in stark contrast to the flat agricultural fields of the San Joaquin valley seen in the foreground. Below the summit, but still well away from city lights, the Mt. Pinos parking lot at 2,468 meters (8,100 feet) is a popular viewing area for both amateur and professional astronomers and astro-photographers. For visualization purposes, topographic heights displayed in this image are exaggerated two times.

The elevation data used in this image was acquired by SRTM aboard the Space Shuttle Endeavour, launched on February 11, 2000. SRTM used the same radar instrument that comprised the Spaceborne Imaging Radar-C/X-Band Synthetic Aperture Radar (SIR-C/X-SAR) that flew twice on Endeavour in 1994. SRTM was designed to collect three-dimensional measurements of Earth's land surface. To collect the 3-D SRTM data, engineers added a mast 60 meters (about 200 feet) long, installed additional C-band and X-band antennas, and improved tracking and navigation devices. The mission is a cooperative project between the NASA, the National Imagery and Mapping Agency (NIMA) of the U.S. Department of Defense, and the German and Italian space agencies. It is managed by NASA's Jet Propulsion Laboratory, Pasadena, Calif., for NASA's Earth Science Enterprise,Washington, D.C. JPL is a division of the California Institute of Technology in Pasadena.