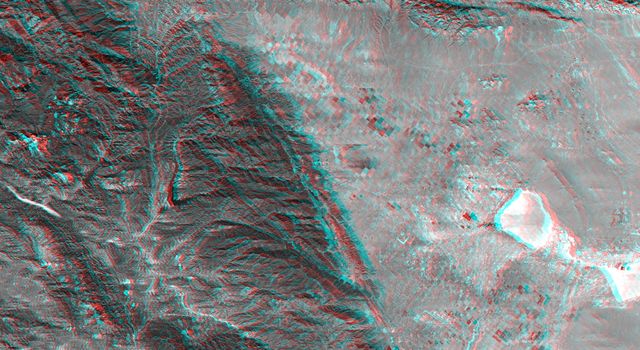 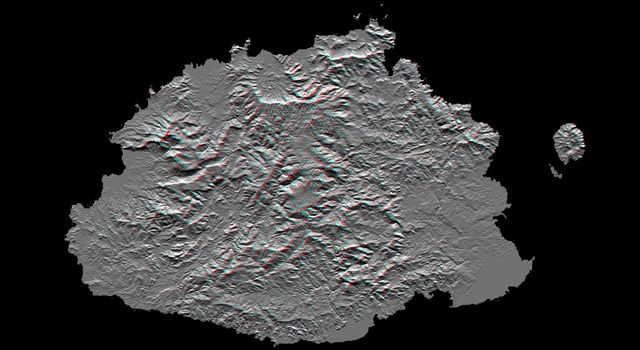 This anaglyph satellite image shows Miquelon and Saint Pierre Islands, located south of Newfoundland, Canada. These islands are a self-governing territory of France. A "tombolo" (sand bar) unites Grande Miquelon to the north and Petite Miquelon to the south. Saint Pierre Island, located to the lower right, includes a harbor, an airport, and a small town. Glaciers once covered these islands and the direction of glacial flow is evident in the topography as striations and shoreline trends running from the upper right to the lower left. The darkest image features are freshwater lakes that fill glacially carved depressions and saltwater lagoons that are bordered by barrier beaches. The lakes and the lagoons are fairly calm waters and reflect less sunlight than do the wave covered and sediment laden nearshore ocean currents.

The stereoscopic effect was created by first draping a Landsat satellite image over preliminary digital elevation data from the Shuttle Radar Topography Mission (SRTM), and then generating two differing perspectives, one for each eye. When viewed through special glasses, the result is a vertically exaggerated view of the Earth's surface in its full three dimensions. Anaglyph glasses cover the left eye with a red filter and cover the right eye with a blue filter.

Landsat has been providing visible and infrared views of the Earth since 1972. SRTM elevation data matches the 30-meter resolution of most Landsat images and will substantially help in analyses of the large and growing Landsat image archive. The Landsat 7 Thematic Mapper image used here was provided to the SRTM project by the United States Geological Survey, Earth Resources Observation Systems (EROS) DataCenter, Sioux Falls, South Dakota.

The elevation data used in this image was acquired by SRTM aboard the Space Shuttle Endeavour, launched on February 11, 2000. SRTM used the same radar instrument that comprised the Spaceborne Imaging Radar-C/X-Band Synthetic Aperture Radar (SIR-C/X-SAR) that flew twice on the Space Shuttle Endeavour in 1994. SRTM was designed to collect three-dimensional measurements of the Earth's land surface. To collect the 3-D SRTM data, engineers added a mast 60-meters (about 200-feet) long, installed additional C-band and X-band antennas, and improved tracking and navigation devices. The mission is a cooperative project between the National Aeronautics and Space Administration (NASA), the National Imagery and Mapping Agency (NIMA) of the U.S. Department of Defense (DoD), and the German and Italian space agencies. It is managed by NASA's Jet Propulsion Laboratory, Pasadena, CA, for NASA's Earth Science Enterprise, Washington DC.