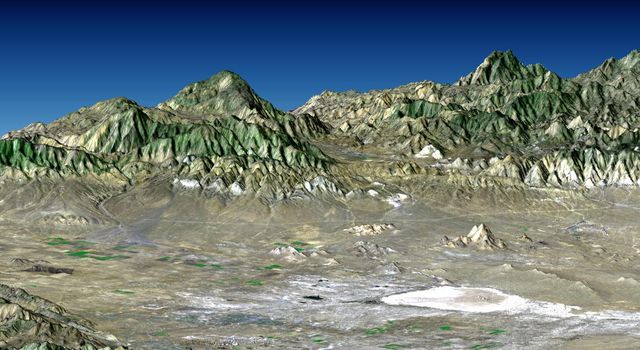 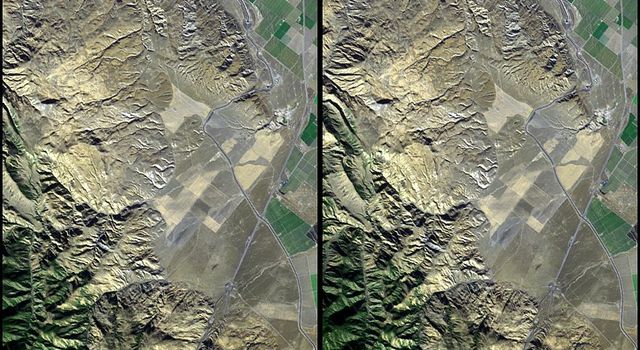 Southern California's dramatic topography plays acritical role in its climate, hydrology, ecology, agriculture, and habitability. This image of Southern California, from the desert at Mojave to the ocean at Ventura, shows a variety of landscapes and environments. Winds usually bring moisture to this area from the west, moving from the ocean, across the coastal plains, to the mountains, and then to the deserts. Most rainfall occurs as the air masses rise over the mountains and cool with altitude. Continuing east, and now drained of their moisture, the air masses drop in altitude and warm as they spread across the desert. The mountain rainfall supports forest and chaparral vegetation, seen here, and also becomes ground water and stream flow that supports citrus, avocado, strawberry, other crops, and a large and growing population on the coastal plains.

This perspective view was generated by draping a Landsat satellite image over a preliminary topographic map from the Shuttle Radar Topography Mission. It shows the Tehachapi Mountains in the right foreground, the city of Ventura on the coast at the distant left, and the eastern most Santa Ynez Mountains forming the skyline at the distant right.

Landsat has been providing visible and infrared views of the Earth since 1972. SRTM elevation data matches the 30 meter resolution of most Landsat images and will substantially help in analyses of the large and growing Landsat image archive.

The elevation data used in this image was acquired by the Shuttle Radar Topography Mission (SRTM) aboard the Space Shuttle Endeavour, launched on February 11, 2000. SRTM used the same radar instrument that comprised the Spaceborne Imaging Radar-C/X-Band Synthetic Aperture Radar (SIR-C/X-SAR) that flew twice on the Space Shuttle Endeavour in 1994. SRTM was designed to collect three-dimensional measurements of the Earth's surface. To collect the 3-D data, engineers added a 60-meter-long (200-foot) mast, installed additional C-band and X-band antennas, and improved tracking and navigation devices. The mission is a cooperative project between the National Aeronautics and Space Administration (NASA), the National Imagery and Mapping Agency (NIMA) of the U.S. Department of Defense (DoD), and the German and Italian space agencies. It is managed by NASA's Jet Propulsion Laboratory, Pasadena, CA, for NASA's Earth Science Enterprise, Washington DC.