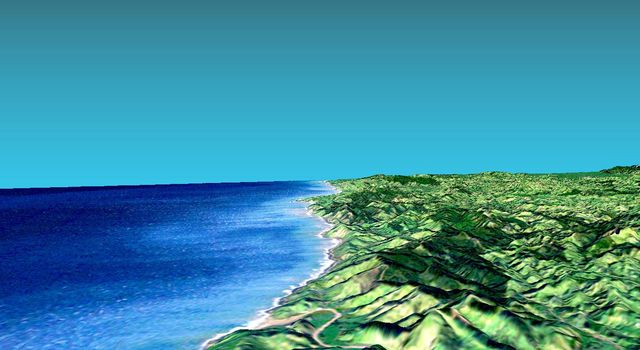 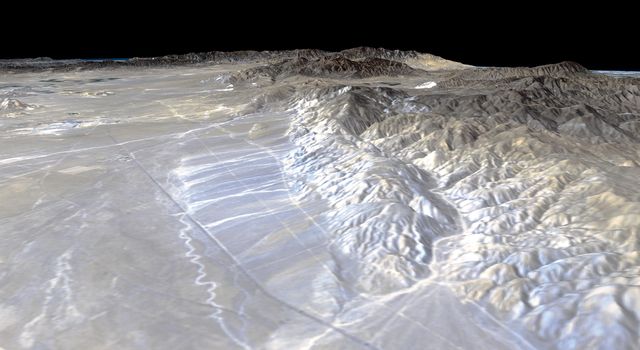 The prominent linear feature straight down the center of this perspective view is California's famous San Andreas Fault. The image, created with data from NASA's Shuttle Radar Topography Mission (SRTM), will be used by geologists studying fault dynamics and landforms resulting from active tectonics. This segment of the fault lies west of the city of Palmdale, Calif., about 100 kilometers (about 60 miles) northwest of Los Angeles. The fault is the active tectonic boundary between the North American plate on the right, and the Pacific plate on the left. Relative to each other, the Pacific plate is moving away from the viewer and the North American plate is moving toward the viewer along what geologists call a right lateral strike-slip fault. Two large mountain ranges are visible, the San Gabriel Mountains on the left and the Tehachapi Mountains in the upper right. Another fault, the Garlock Fault lies at the base of the Tehachapis; the San Andreas and the Garlock Faults meet in the center distance near the town of Gorman. In the distance, over the Tehachapi Mountains is California's Central Valley. Along the foothills in the right hand part of the image is the Antelope Valley, including the Antelope Valley California Poppy Reserve. The data used to create this image were acquired by SRTM aboard the Space Shuttle Endeavour, launched on February 11, 2000.

This type of display adds the important dimension of elevation to the study of land use and environmental processes as observed in satellite images. The perspective view was created by draping a Landsat satellite image over an SRTM elevation model. Topography is exaggerated 1.5 times vertically. The Landsat image was provided by the United States Geological Survey's Earth Resources Observations Systems (EROS) Data Center, Sioux Falls, South Dakota.

SRTM uses the same radar instrument that comprised the Spaceborne Imaging Radar-C/X-Band Synthetic Aperture Radar (SIR-C/X-SAR) that flew twice on the Space Shuttle Endeavour in 1994. SRTM was designed to collect three-dimensional measurements of the Earth's surface. To collect the 3-D data, engineers added a 60-meter-long (200-foot) mast, installed additional C-band and X-band antennas, and improved tracking and navigation devices. The mission is a cooperative project between the National Aeronautics and Space Administration (NASA), the National Imagery and Mapping Agency (NIMA) of the U.S. Department of Defense (DoD), and the German and Italian space agencies. It is managed by NASA's Jet Propulsion Laboratory, Pasadena, CA, for NASA's Earth Science Enterprise, Washington, DC.