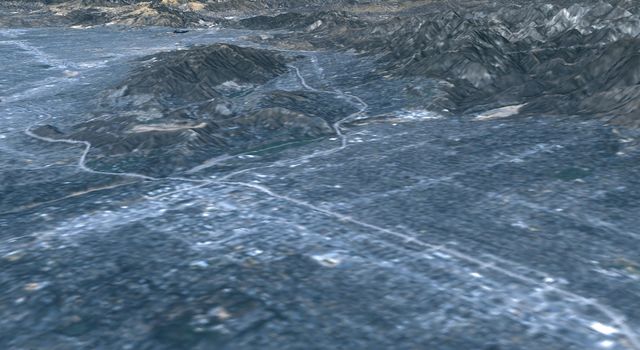 This stereoscopic image pair is a perspective view that shows the western part of the city of Pasadena, California, looking north toward the San Gabriel Mountains. Portions of the cities of Altadena and La Canada Flintridge are also shown. The cluster of large buildings left of center, at the base of the mountains, is the Jet Propulsion Laboratory. This image shows the power of combining data from different sources to create planning tools to study problems that affect large urban areas. In addition to the well-known earthquake hazards, Southern California is affected by a natural cycle of fire and mudflows. Data shown in this image can be used to predict both how wildfires spread over the terrain and how mudflows are channeled down the canyons.

The image was created from three datasets: the Shuttle Radar Topography Mission (SRTM) supplied the elevation, U. S. Geological Survey digital aerial photography provided the image detail, and the Landsat Thematic Mapper provided the color. The United States Geological Survey's Earth Resources Observations Systems (EROS) Data Center, Sioux Falls, South Dakota, provided the Landsat data and the aerial photography. The image can be viewed in 3-D by viewing the left image with the right eye and the right image with the left eye (cross-eyed viewing), or by downloading and printing the image pair, and viewing them with a stereoscope.

The Shuttle Radar Topography Mission (SRTM), launched on February 11, 2000, used the same radar instrument that comprised the Spaceborne Imaging Radar-C/X-Band Synthetic Aperture Radar (SIR-C/X-SAR) that flew twice on the Space Shuttle Endeavour in 1994. The mission was designed to collect three-dimensional measurements of the Earth's surface. To collect the 3-D data, engineers added a 60-meter-long (200-foot) mast, an additional C-band imaging antenna and improved tracking and navigation devices. The mission is a cooperative project between the National Aeronautics and Space Administration (NASA), the National Imagery and Mapping Agency (NIMA) and the German (DLR) and Italian (ASI) space agencies. It is managed by NASA's Jet Propulsion Laboratory, Pasadena, CA, for NASA's Earth Science Enterprise, Washington, DC.