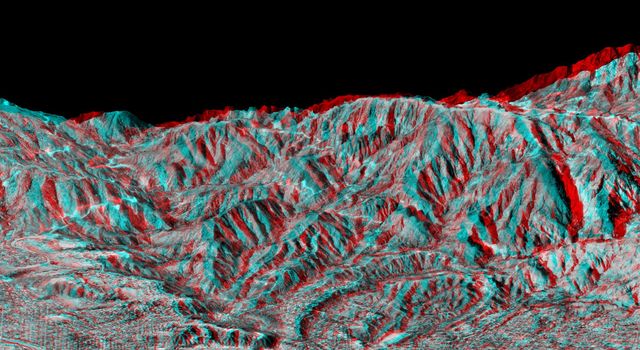 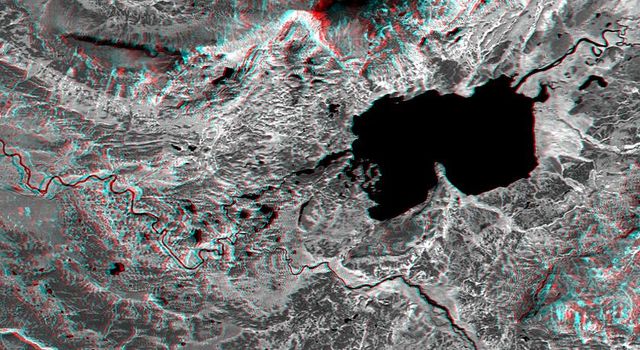 This 3-D view of a coastal area in southernmost Oman shows how topographic information can be used to enhance satellite images, deriving a better understanding of the processes that sculpt the landscape. The coastline in the upper half of the image appears to follow the same trend as a canyon in the lower half of the image. Both features are probably coincident with a single fault that cuts the limestone bedrock. Note how in this climate limestone erodes sharply along the stream courses resulting in deep and narrow canyons. Generally the landscape is barren, but the darker areas have sparse vegetation that is supported by summer monsoon moisture. The Arabian Sea is on the right.

This anaglyph was generated by first draping a Landsat Thematic Mapper image over a topographic map from the Shuttle Radar Topography Mission, then using the topographic data to create two differing perspectives, one for each eye. When viewed through special glasses, the result is a vertically exaggerated view of the Earth's surface in its full three dimensions. Anaglyph glasses cover the left eye with a red filter and cover the right eye with a blue filter.

The Shuttle Radar Topography Mission (SRTM), launched on February 11, 2000, used the same radar instrument that comprised the Spaceborne Imaging Radar-C/X-Band Synthetic Aperture Radar (SIR-C/X-SAR) that flew twice on the Space Shuttle Endeavour in 1994. The mission was designed to collect three-dimensional measurements of the Earth's surface. To collect the 3-D data, engineers added a 60-meter-long (200-foot) mast, an additional C-band imaging antenna and improved tracking and navigation devices. The mission is a cooperative project between the National Aeronautics and Space Administration (NASA), the National Imagery and Mapping Agency (NIMA) and the German (DLR) and Italian (ASI)space agencies. It is managed by NASA's Jet Propulsion Laboratory, Pasadena, CA, for NASA's Earth Science Enterprise, Washington, DC.