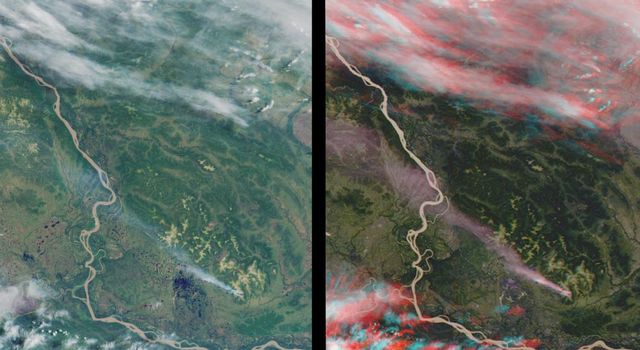 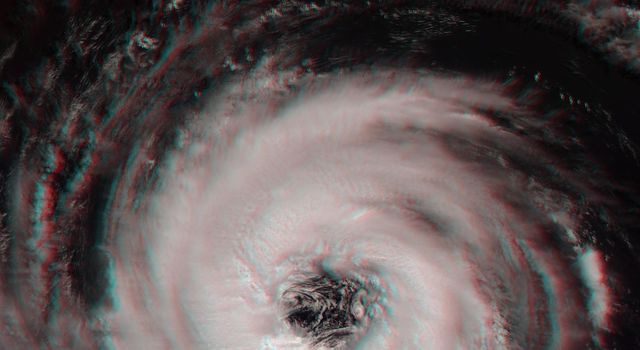 Into the Eye of the Storm

These MISR images of the Sierra Nevada mountains near the California-Nevada border were acquired on August 12, 2000 during Terra orbit 3472. On the left is an image from the vertical-viewing (nadir) camera. On the right is a stereo "anaglyph" created using the nadir and 45.6-degree forward-viewing cameras, providing a three-dimensional view of the scene when viewed with red/blue glasses. The red filter should be placed over your left eye. To facilitate the stereo viewing, the images have been oriented with north toward the left.

Some prominent features are Mono Lake, in the center of the images; Walker Lake, to its left; and Lake Tahoe, near the lower left. This view of the Sierra Nevadas includes Yosemite, Kings Canyon, and Sequoia National Parks. Mount Whitney, the highest peak in the contiguous 48 states (elev. 14,495 feet), is visible near the righthand edge. Above it (to the east), the Owens Valley shows up prominently between the Sierra Nevada and Inyo ranges.

Precipitation falling as rain or snow on the Sierras feeds numerous rivers flowing southwestward into the San Joaquin Valley. The abundant fields of this productive agricultural area can be seen along the lower right; a large number of reservoirs that supply water for crop irrigation are apparent in the western foothills of the Sierras. Urban areas in the valley appear as gray patches; among the California cities that are visible are Fresno, Merced, and Modesto.