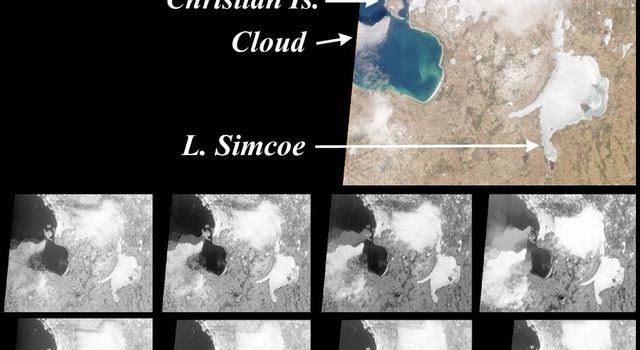 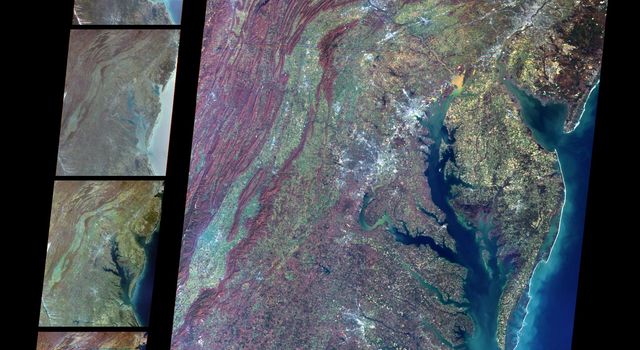 MISR images of tropical northern Australia acquired on June 1, 2000 (Terra orbit 2413) during the long dry season. Left: color composite of vertical (nadir) camera blue, green, and red band data. Right: multi-angle composite of red band data only from the cameras viewing 60 degrees aft, 60 degrees forward, and nadir. Color and contrast have been enhanced to accentuate subtle details. In the left image, color variations indicate how different parts of the scene reflect light differently at blue, green, and red wavelengths; in the right image color variations show how these same scene elements reflect light differently at different angles of view. Water appears in blue shades in the right image, for example, because glitter makes the water look brighter at the aft camera's view angle. The prominent inland water body is Lake Argyle, the largest human-made lake in Australia, which supplies water for the Ord River Irrigation Area and the town of Kununurra (pop. 6500) just to the north. At the top is the southern edge of Joseph Bonaparte Gulf; the major inlet at the left is Cambridge Gulf, the location of the town of Wyndham (pop. 850), the port for this region. This area is sparsely populated, and is known for its remote, spectacular mountains and gorges. Visible along much of the coastline are intertidal mudflats of mangroves and low shrubs; to the south the terrain is covered by open woodland merging into open grassland in the lower half of the pictures.