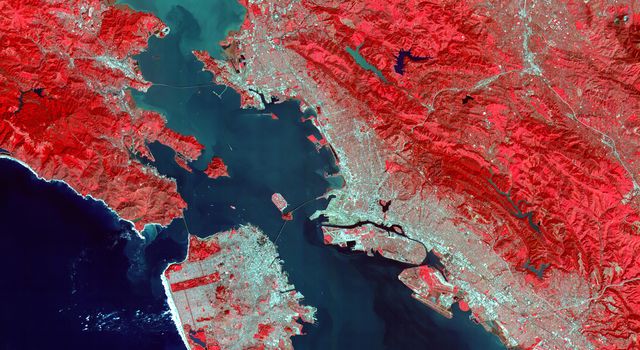 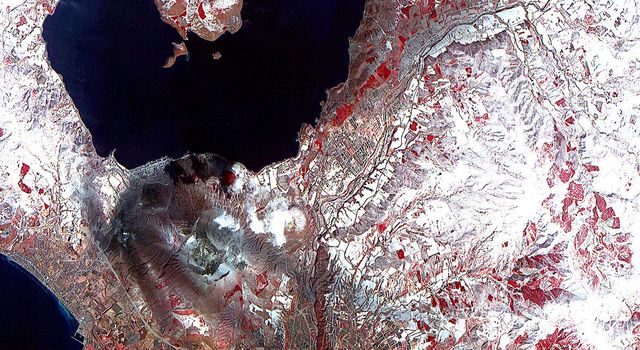 This image of the city of Tokyo was acquired on March 22, 2000 by the Advanced Spaceborne Thermal Emission and Reflection Radiometer (ASTER) on NASA's Terra satellite. With its 14 spectral bands from the visible to the thermal infrared wavelength region, and its high spatial resolution of 15 to 90 meters (about 50 to 300 feet), ASTER will image the Earth for the next 6 years to map and monitor the changing surface of our planet.

This false color infrared image covers an area 60 km wide and 75 km long in three bands of the short wavelength infrared region, with a spatial resolution of 15 m. It shows part of the Tokyo metropolitan area extending south to Yokohama; included are the Ginza District, Haneda airport and the Imperial Palace. To the west, Tokyo is hemmed in by mountains, covered with forests (displayed in red); on the southeast, Tokyo Bay is one of the world's great harbors.

Advanced Spaceborne Thermal Emission and Reflection Radiometer (ASTER) is one of five Earth-observing instruments launched December 18, 1999, on NASA's Terra satellite. The instrument was built by Japan's Ministry of International Trade and Industry. A joint U.S./Japan science team is responsible for validation and calibration of the instrument and the data products. Dr. Anne Kahle at NASA's Jet Propulsion Laboratory, Pasadena, California, is the U.S. Science team leader; Moshe Pniel of JPL is the project manager. ASTER is the only high resolution imaging sensor on Terra. The primary goal of the ASTER mission is to obtain high-resolution image data in 14 channels over the entire land surface, as well as black and white stereo images. With revisit time of between 4 and 16 days, ASTER will provide the capability for repeat coverage of changing areas on Earth's surface.