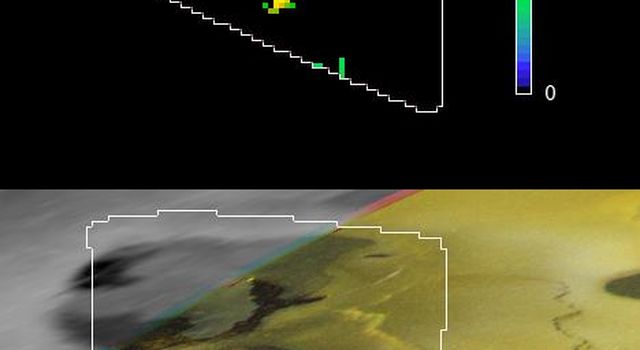 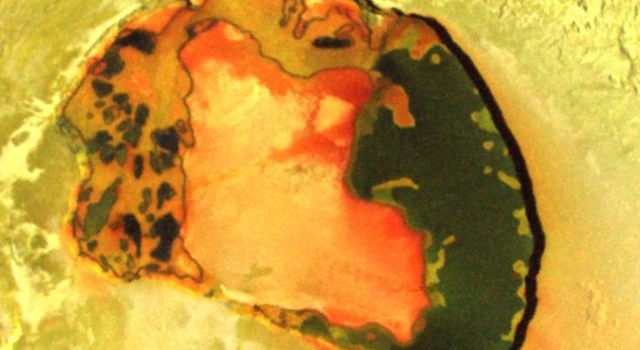 High temperatures observed by NASA's Galileo spacecraft along the western edge of the Loki volcano on Jupiter's moon Io may indicate freshly exposed material at the shore of a lava lake.

Two temperature maps of the southern portion of Loki show hot (lower right) and hotter (upper right) features based on infrared-wavelength observations during an Oct. 16, 2001, flyby of Io. For context, they are shown beside a visible-wavelength picture (left) of the area taken during an earlier flyby.

Loki is the most powerful volcano on Io. It has been active since at least 1979, when it was discovered by NASA's Voyager mission. Loki's dark volcanic crater, called a caldera, surrounds a light-colored island, as seen in the camera image (left). Previous observations by Galileo's instruments have shown that active lavas and still-cooling lava flows cover the floor of the caldera. In contrast, the island is cold and has no volcanic activity except in a narrow dark region that may be a crack or valley. Current volcanic activity appears in the two temperature maps from Galileo's near-infrared mapping spectrometer instrument. The lower right image shows where the surface is glowing at an infrared wavelength of 4.4 microns, with the yellow-orange coding correlated to temperatures of about 360 degrees Kelvin (188 Fahrenheit) and the reddish coding correlated to temperatures of about 430 Kelvin (314 Fahrenheit). The upper right image is at a wavelength of 2.5 microns, with the white streak correlated to temperatures of roughly 840 Kelvin (1,052 Fahrenheit). Each picture element averages the characteristics of an area about 2 kilometers (1.2 miles) across; smaller patches may be hundreds of degrees higher.

Loki has puzzled scientists trying to determine what type of volcano it is. One idea holds it is an active lava lake with molten material under the crust. A competing view is it is a caldera whose floor is continuously flooded by lavas in successive flows. The concentration of higher temperatures along the western edge in the 2.5 micron map favors the lava lake idea. The cooler crust of molten lava lakes on Earth, such as on Hawaii's Kilauea volcano, tends to drift outward and hit against the caldera wall. This causes the crust next to the wall to break up, exposing hotter material from underneath.