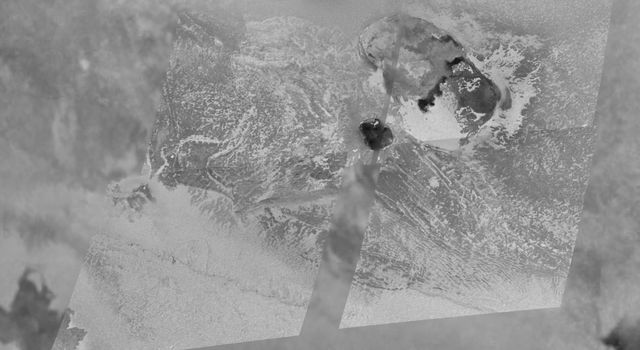 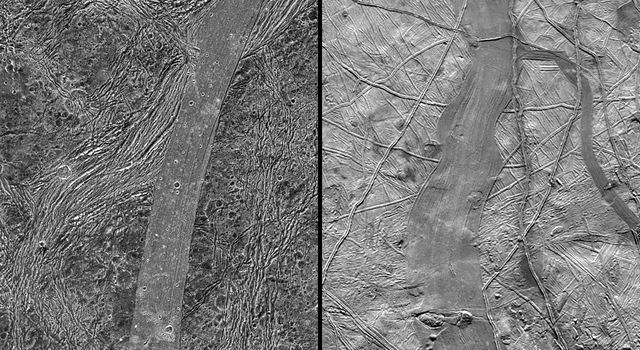 Comparison of Ganymede and Europa features

Galileo scientists are studying Amirani to understand how such large lava flows are created. The last eruption this size on Earth happened about 15 million years ago along the Columbia River in what is now the state of Washington. Many scientists thought that such long lava flows were formed in violent volcanic outbursts. However, the eruption observed at Amirani is relatively calm, despite the fact that over 100tons of lava are disgorged every second. Galileo's observations of Io indicate that huge, ancient lava flows on the Earth, such as the Columbia River flood basalts, could also have formed in relatively tranquil eruptions.

The color image on the left is a composite of black-and-white images collected on Feb. 22, 2000, at a resolution of 210 meters (690 feet) per picture element, and color images collected on June 30, 1999, at 1.3 kilometers (0.8 mile) per picture element. The white boxes and arrows show the locations of the areas analyzed in detail on the right. The left-hand pair of black-and-white images, labeled I24, are parts of a mosaic collected on Oct. 11, 1999, at 500 meters (550 yards) per picture element. The center pair of images, labeled I27, shows what the same areas looked like on Feb. 22, 2000. These later images are about twice as sharp as the earlier images, making some features that did not change appear crisper. In order to demonstrate the real changes, the I27 images were divided by the I24 images, producing the pair of ratio images on the right. The new dark lava that erupted between October 1999 and February 2000 has been highlighted in red.