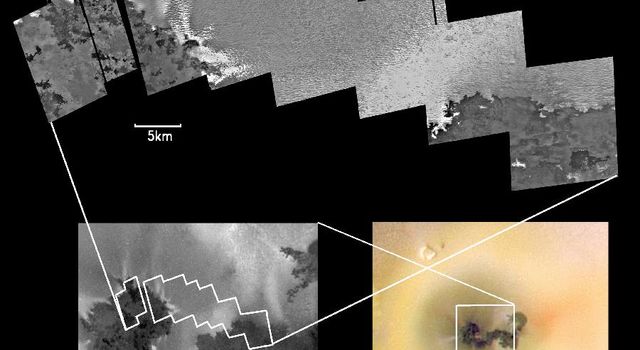 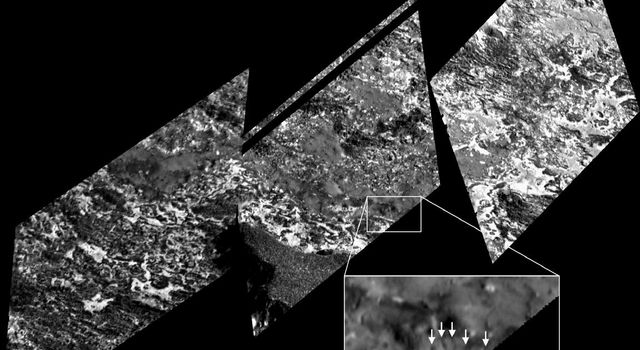 A hot, active volcanic crater named Camaxtli Patera (large feature to the right) is shown in this image of Jupiter's moon Io taken by NASA's Galileo spacecraft on February 22, 2000.

A patera is a large depression, probably of volcanic origin, but also affected by cracks and faults in Io's crust. There appear to be both bright and dark lava flows on the patera floor. The dark lava flows are likely to have cooled from super-hot, magnesium-rich, silicate lava of the type that existed on Earth billions of years ago. The bright patches may be much cooler, sulfur-rich lava flows. Bright deposits can also be seen just outside of Camaxtli, and there is a halo of diffuse dark material that extends up to 30 kilometers (19 miles) from the rim of the patera. This halo is probably made up of frozen droplets of lava that rained down after they were blasted into the sky from vents in Camaxtli.

Two smaller paterae, which are unnamed, are to the left (west) of Camaxtli. One has very dark, very fresh lava on the floor and is hotter than the larger Camaxtli Patera because it is erupting lava at a faster rate. The other is comparatively bright, like the surrounding plains. This implies that the volcanism here has been dormant for long enough that snow and frost have covered the lava flows.

The surrounding plains are mottled and appear to be topographically rough. The lumpy texture of the ground around Camaxtli appears to be a common feature of the frozen plains of Io. The Sun is almost directly overhead (actually 12 degrees to the south), so most of the brightness variations in this image are due to different types of surface materials rather than topographic shading. The image resolution is 186 meters (204 yards) per picture element and the scene width is 145 kilometers (91 miles). The center of the image is located at about 15 north latitude, 138 west longitude.

The Jet Propulsion Laboratory, Pasadena, Calif., manages the mission for NASA's Office of Space Science, Washington, D.C. JPL is a division of the California Institute of Technology in Pasadena.