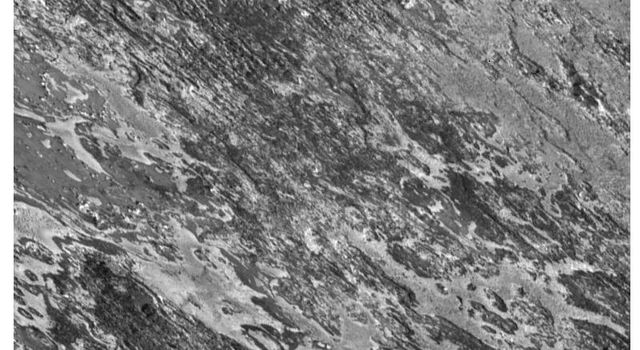 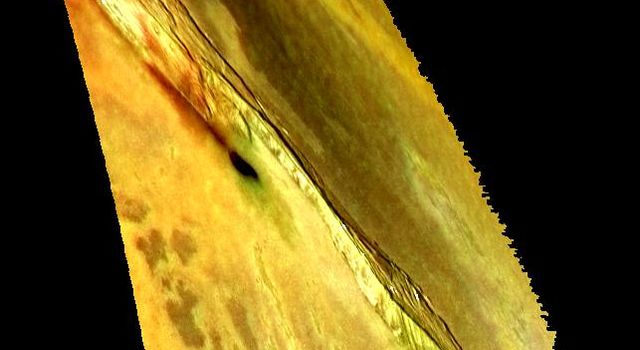 This mosaic of images taken by NASA's Galileo spacecraft on February 22, 2000 shows three mountains and two lava-filled depressions in the Shamshu region of Jupiter's moon Io. The dark oval feature on the left side of the image is a depression that has been resurfaced by lava flows. The rough terrain northeast of the depression is Shamshu Mons. A10-kilometer (6-mile) wide canyon oriented in northeast to southwest direction cuts this mountain. The northwestern edge of the mountain has been scalloped by erosion, and it appears that the material has flowed along the canyon floor.

Portions of two more mountains can be seen on the right side of the image. The depression between these mountains is Shamshu Patera, a volcanic hotspot. The dark patches within it are recent and active lava flows. The northernmost edge of Shamshu Patera appears to be cutting into the mountain to its northeast.

North is to the top of the picture and the Sun illuminates the surface from the west. This mosaic has a resolution of about 345 meters (1,130 feet) per picture element and covers an area approximately 390 by 380 kilometers (240 by 235 miles) at its maximum dimensions. It is centered at about 9 degrees south latitude and 68 degrees west longitude. The images that make up this mosaic were acquired at a range of 34,500 kilometers (21,400 miles) by Galileo's onboard camera.

The Jet Propulsion Laboratory, Pasadena, CA manages the mission for NASA's Office of Space Science, Washington, DC. JPL is a division of the California Institute of Technology, Pasadena, CA.