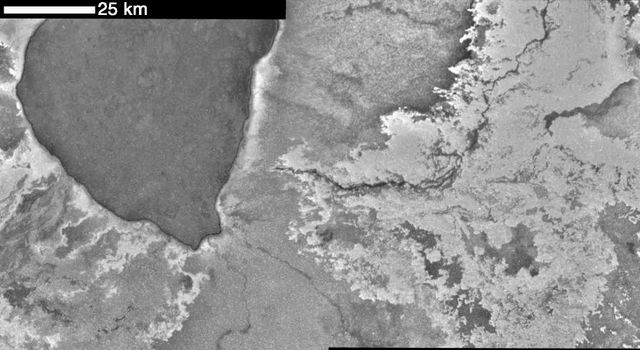 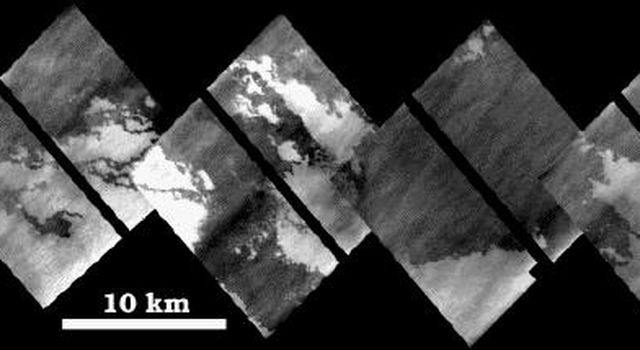 These images illustrate just how quickly the surface of Io is changing. The image on the left shows lava flows from the volcano Prometheus as seen by NASA's Galileo spacecraft on October 11, 1999 on its 24th orbit (I24). White streaks emanating from around the edge of the flow may be frost deposited by small plumes of gas rich in sulfur dioxide that is vaporized by the hot lava. Bright material from the Prometheus plume quickly covers any cool surface; therefore, the darkest areas are the youngest lava flows. The middle image shows the same area as it appeared to Galileo 4-1/2 months later, on February 22, 2000 during its 27th orbit (I27). Numerous changes in the shapes and locations of the dark lava flows and bright streaks are evident.

The image on the right is a ratio of the I27 and I24 images (constructed by dividing the I27 image by the I24 image) which illustrates the changes that occurred between I24 and I27. Anything that became darker between October and February is dark in the ratio image and anything that became brighter is bright in the ratio. The juxtaposition of the dark and bright areas in the ratio image indicates that most of the fresh (dark) flows seen in I27 are extensions of the flows that were fresh (dark) during I24. Approximately 60 square kilometers (23 square miles) were covered by new lava flows in the 134 days between the two images. This means the average rate at which lava is covering the surface is about .45 square kilometers (.18 square miles) per day. This rate for Prometheus is about 10 times higher than peak eruption rates at Kilauea in Hawaii.

North is to the top in all images, and the images have resolutions of about 180 meters (or yards) per picture element. The large doses of radiation to which the spacecraft is subjected each time it passes close to Jupiter caused a problem with Galileo's camera, which resulted in scrambling of the I24 image. Engineers at NASA's Jet Propulsion Laboratory (JPL), Pasadena, CA, were able to reconstruct the image, but a black stripe remains where data could not be recovered. Some areas that could not be reconstructed appear blurred. To avoid a recurrence of this problem, a different camera mode was used during I27, so the later image is fine.

JPL manages the mission for NASA's Office of Space Science, Washington, DC. JPL is a division of the California Institute of Technology, Pasadena, CA.