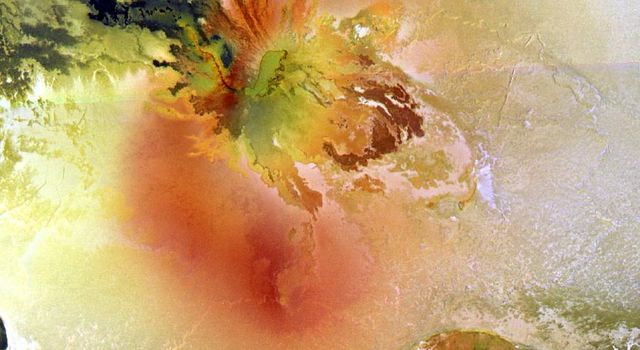 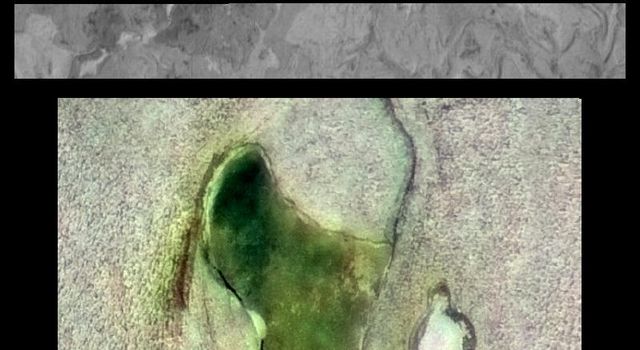 Volcanic calderas, lava flows and cliffs are seen in this false color image of a region near the south pole of Jupiter's volcanic moon Io. It was created by combining a black and white image taken by NASA's Galileo spacecraft on February 22, 2000 with lower resolution color images taken by Galileo on July 3, 1999. The three black spots (top center and middle left) are small volcanic calderas about 10-20 kilometers (6-12 miles) in size, which are dark because their floors are covered by recent lava flows. Two of these three calderas are surrounded by diffuse dark material, which may have been thrown out of the calderas by explosive eruptions.

The bright, white material is thought to be sulfur-dioxide frost and is concentrated near the cliffs in this image. It may be formed when liquid sulfur dioxide seeps out at the base of mountain scarps, vaporizes into a plume of gas, liquid and solid, and then condenses again on the surface. Part of this process, called sapping, occurs in arid environments on Earth when ground water seeps out at the bases of cliffs. The vaporization and production of plumes is much more dramatic on Io due to the lower gravitational acceleration and especially the very low atmospheric pressure. It may be one of the dominant erosion processes on Io.

The mountain at the center left, named Telegonus Mensae, exhibits a number of ridges parallel to its margins. These ridges have been observed on a number of other Ionian mountains and they suggest that as the mountain ages, it is collapsing outward under the influence of gravity.

The yellow lava flow at the southern end of the image appears to be fed by a dark channel that connects to a dark caldera. This is a likely candidate for a lava flow composed of sulfur (rather than silicate material).

The image is centered at 53.8 degrees south latitude and 117.1 degrees west longitude and north is to the top. The higher resolution image has a resolution of 350 meters (or yards) per picture element and is illuminated from the upper left. It was taken at a range of 34,000 kilometers (21,000 miles). The color images have resolutions of 1.3 kilometers (0.81 miles) per picture element and are illuminated from almost directly behind the spacecraft. They were taken at a distance of about 130,000 kilometers (81,000 miles) by Galileo's onboard camera.

The Jet Propulsion Laboratory, Pasadena, CA manages the Galileo mission for NASA's Office of Space Science, Washington, DC. JPL is a division of the California Institute of Technology, Pasadena, CA.