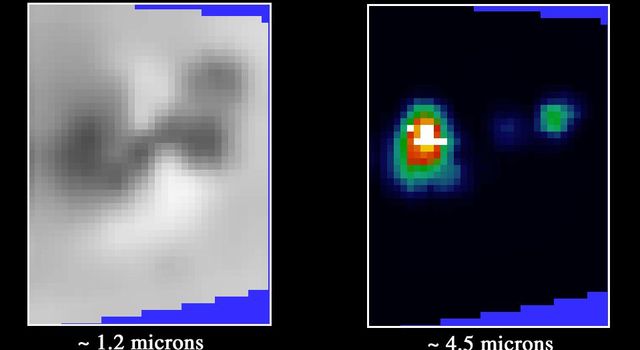 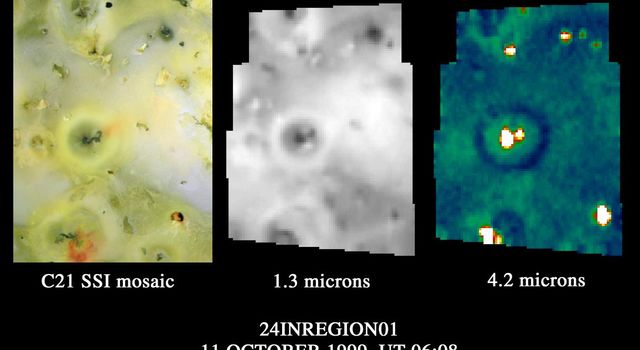 This image shows Loki, the most powerful volcano in the solar system, which has been constantly active on Jupiter's moon Io for at least 20 years. NASA's Galileo spacecraft took these images during its approach to Io on October 10, 1999. One of the spacecraft's instruments, the near infrared mapping spectrometer, was used to capture this observation. The instrument detects heat from objects in the infrared wavelengths not visible to the naked eye.

Loki is a volcanic caldera about 200 kilometers (124 miles) across, nearly four times the width of the Yellowstone caldera on Earth. On the left side of the top image is a picture taken in visible light wavelengths by Galileo's camera showing the context of the NIMS image on the right. This thermal map taken by the spectrometer at 4.7 microns shows that heat is being emitted from the areas that are dark in the camera image.

The bottom image shows additional spectrometer data obtained as the platform that holds the instrument on the spacecraft was moving toward the next target. This repositioned scan (shown as the zig-zag pattern) allowed the spectrometer to sample the warm, dark floor of the Loki caldera and the cold regions outside the caldera. The thermal map shows that the dark materials on the floor of Loki are cooling lava, near zero degrees Celsius(32 Fahrenheit). This substantially hotter than Io's surface temperature of about -180 degrees Celsius (-300 Fahrenheit). In previous observations, higher lava temperatures have been measured by the spectrometer at Loki, with temperatures similar to those of basaltic lava on Earth. The lighter, colored area in the camera image, which appears to be an island, is cold, which means it has not been active recently.

Launched in October 1989, Galileo entered orbit around Jupiter on December 7, 1995 on a mission to study the giant planet, its largest moons and its magnetic environment. JPL manages the mission for NASA's Office of Space Science, Washington, DC. JPL is a division of the California Institute of Technology, Pasadena, CA.

This image and other images and data received from Galileo are posted on the World Wide Web, on the Galileo mission home page at http://solarsystem.nasa.gov/galileo/. Background information and educational context for the images can be found at http://galileo.jpl.nasa.gov/gallery/io.cfm.