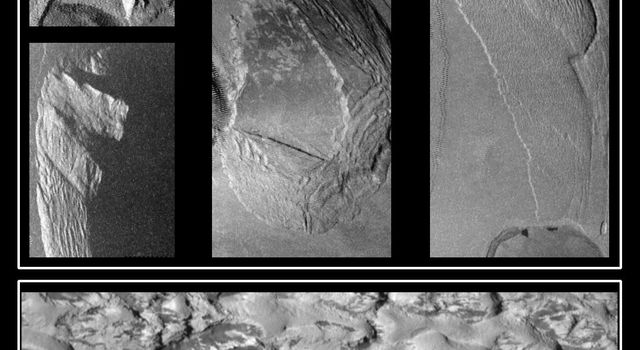 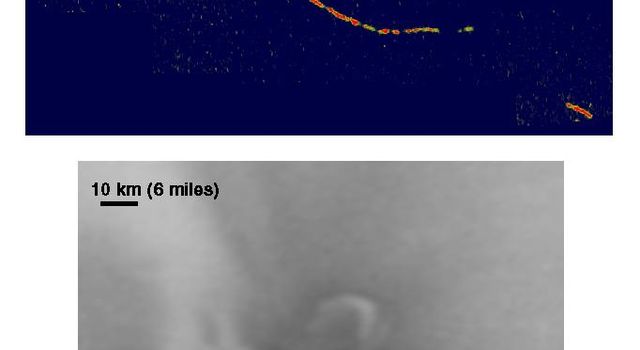 This collage of images shows the dizzying rate of geologic activity at one of the many erupting volcanoes on Jupiter's moon Io, as viewed by NASA's Galileo spacecraft during the closest-ever Io flyby on October 10, 1999. The top panel shows the best overall view of the Prometheus volcano, combining a picture at a resolution of 120 meters (400 feet) per picture element with a picture at a resolution of 1.5 kilometers (about one mile) per picture element. Inset within this panel is a smaller copy of the mosaic with a temperature map superimposed.

The Galileo camera took the pictures, while the temperatures were measured by the spacecraft's near infrared mapping spectrometer instrument. Combining these data, Galileo scientists have created a description of the eruption at Prometheus. The magma is stored in an underground chamber beneath the caldera (dark, bean-shaped feature) at the northeastern end of Prometheus (top right). The lava reaches the surface about 15 kilometers (10 miles) south of the caldera. This point is marked by the blue, eastern hot spot in the temperature map and by a streak of red, sulfur-rich material (see color panel on the lower left). From the volcanic vent, the lava travels almost 100 kilometers (60 miles) through lava tubes to the front of the flow. The exposed liquid lava produces the large high temperature area on the western end of Prometheus (color panel at lower left). A 100 kilometer (60 mile) tall plume of sulfur-dioxide rich gas also rises above these active lava flows. A smaller breakout of liquid lava midway along the tube forms a faint (purple) hot spot.

Scientists at the University of Arizona, compared the pictures taken on July 3rd and October 10th of this year. They found that changes (see middle and right lower panels) have occurred in the intervening 3 months. A breakout from the middle of the lava tube appears to have taken place within this three-month period, spreading a new dark deposit to the north of the older lava flows. It also appears that the gas discharge from the volcanic vent at the eastern end of the flow has increased. There is a new fan of dark material streaming out from this location. Furthermore, the new, bright crescent-shaped deposit across the middle of Prometheus suggests that the main (western) plume has been pushed aside by the increased gas release to the east. 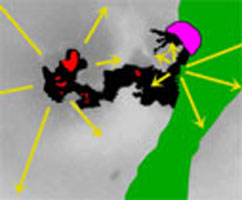