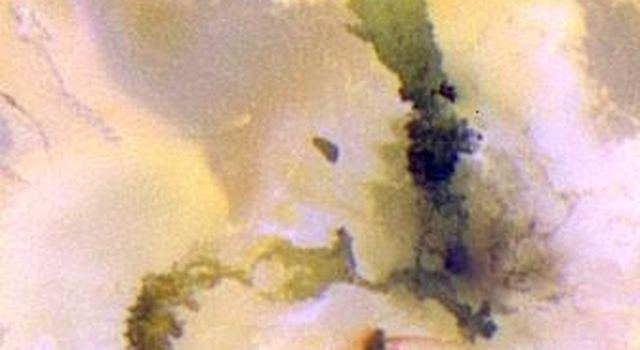 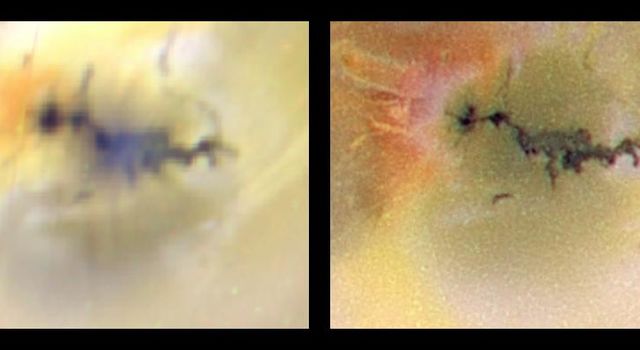 The volcano called Prometheus, found on Jupiter's moon Io, could be called the Old Faithful of the outer solar system, because its volcanic plume has been visible every time it has been observed since 1979. This particular image, one of the highest-resolution pictures ever taken of Io, was obtained by NASA's Galileo spacecraft as it approached Io on July 3, 1999.

The volcanic plume of Prometheus has been visible during observations by Galileo (1996-1999) and NASA's Voyager spacecraft (1979). No other volcano on Io has been so stable in its behavior. However, between the Voyager flybys and the time of Galileo's arrival at Jupiter, the source of the plume has shifted about 70 kilometers (44 miles) to the west.

This false color close-up was taken of Prometheus using the near-infrared, green and violet filters (slightly greater than the visible range) of the spacecraft's camera and processed to enhance subtle color variations.

The long-lived plume has produced a ring-like deposit of bright white and yellow material that is likely to be rich in sulfur dioxide frost. Also note the denser jets in the plume that point like spokes to its source. Galileo scientists do not yet know whether this long-lived plume is erupting from a vent at the west end of the lava flow, or if the plume is being produced by the advancing lava as it flows over ground rich in sulfur dioxide.

Galileo will acquire black and white images of the Prometheus at resolutions between 35 to 70 meters (120 to 230 feet) per picture element and color images at resolutions of about 230 meters (750 feet) per picture element during its close flyby of Jupiter's moon Io on the evening of October 10, 1999 (Pacific time). These images will be important in understanding how volcanic plumes form on Io. In particular, we are interested in seeing if the plume material is escaping from Io's interior or from the surface at the front of active lava flows. These new images may help explain why Prometheus has been so faithfully active.

North is to the top of the picture, and the Sun illuminates the surface from almost directly behind the spacecraft. This illumination is good for imaging color variations, but poor for imaging topographic shading. However, some topography is visible here due to the combination of relatively high resolution (1.3 kilometers or 0.8 miles per picture element) and rugged areas over parts of Io. The image is centered at 2 degrees south latitude and 154 degrees west longitude. The images were taken at a distance of about 130,000 kilometers (81,000 miles) by Galileo's camera and have a resolution of 1.3 kilometers or 0.8 miles per picture element.

The Jet Propulsion Laboratory, Pasadena, CA manages the Galileo mission for NASA's Office of Space Science, Washington, DC. JPL is a division of the California Institute of Technology, Pasadena, CA.

This image and other images and data received from Galileo are posted on the World Wide Web, on the Galileo mission home page at http://solarsystem.nasa.gov/galileo/. Background information and educational context for the images can be found at http://www.jpl.nasa.gov/galileo/sepo