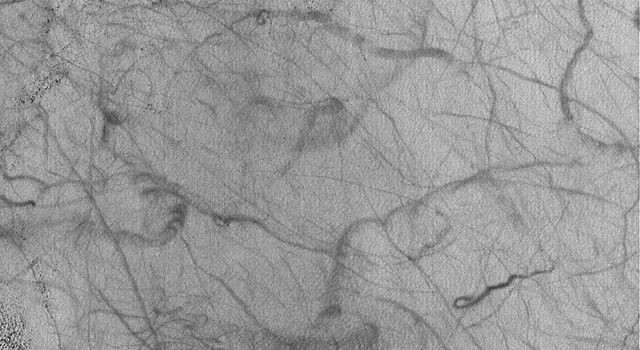 Dust Devils Seen Streaking Across Mars: PART 1--What Are These? 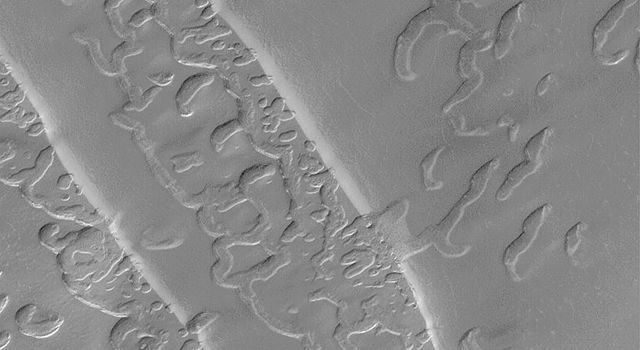 Complex Burial and Exhumation of South Polar Cap Pitted Terrain
Dark streaks, everywhere! Many Mars Global Surveyor (MGS) Mars Orbiter Camera (MOC) images of the middle latitudes of the northern and southern hemispheres of Mars show wild patterns of criss-crossing dark streaks. Many of these streaks are straight and narrow, others exhibit curly arcs, twists, and loops. They often cross over hills, run straight across dunes and ripples, and go through fields of house-sized boulders. The two examples shown above were acquired in the last three months. Both pictures are illuminated by sunlight from the upper left. The first picture (left), showing dark streaks on the rippled flats of Argyre Planitia, covers an area 3 km by 5 km (1.9 by 3.1 miles) at a latitude of 51°S. The second picture (right) shows an area approximately 3 km by 5 km in Promethei Terra at a latitude of 58°S.

For many months the MOC science team was seeing streaks such as these, but were uncertain how they formed. One speculation was that they might result from the passage of dust devils. Each dust devil would leave a dark streak by removing bright dust from the terrain in its path, revealing a darker surface underneath. An image described by the MOC team in July 1998 showed examples of streaks that were, at the time, speculated to be caused by dust devils.