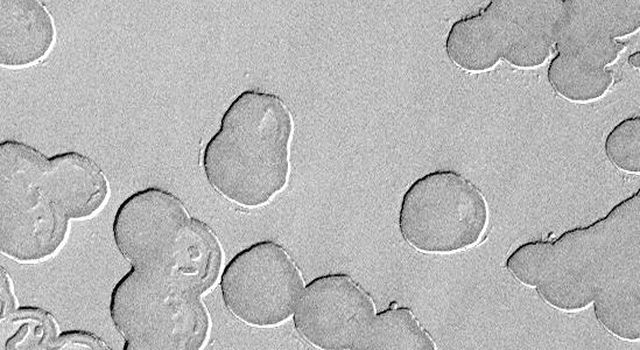 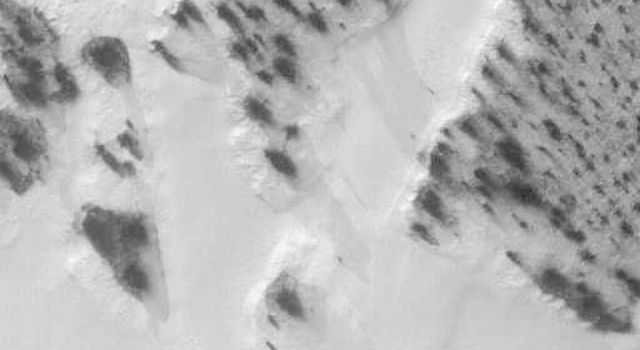 This image is illuminated by sunlight from the upper left.

Looking like pieces of sliced and broken swiss cheese, the upper layer of the martian south polar residual cap has been eroded, leaving flat-topped mesas into which are set circular depressions such as those shown here. The circular features are depressions, not hills. The largest mesas here stand about 4 meters (13 feet) high and may be composed of frozen carbon dioxide and/or water. Nothing like this has ever been seen anywhere on Mars except within the south polar cap, leading to some speculation that these landforms may have something to do with the carbon dioxide thought to be frozen in the south polar region. On Earth, we know frozen carbon dioxide as "dry ice." On Mars, as this picture might be suggesting, there may be entire landforms larger than a small town and taller than 2 to 3 men and women that consist, in part, of dry ice.

No one knows for certain whether frozen carbon dioxide has played a role in the creation of the "swiss cheese" and other bizarre landforms seen in this picture. The picture covers an area 3 x 9 kilometers (1.9 x 5.6 miles) near 85.6°S, 74.4°W at a resolution of 7.3 meters (24 feet) per pixel. This picture was taken by the Mars Global Surveyor (MGS) Mars Orbiter Camera (MOC) during early southern spring on August 3, 1999.