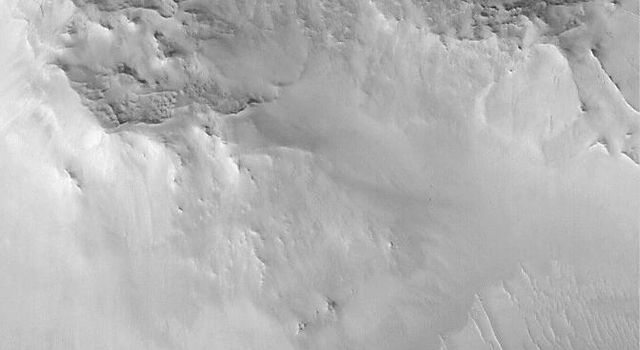 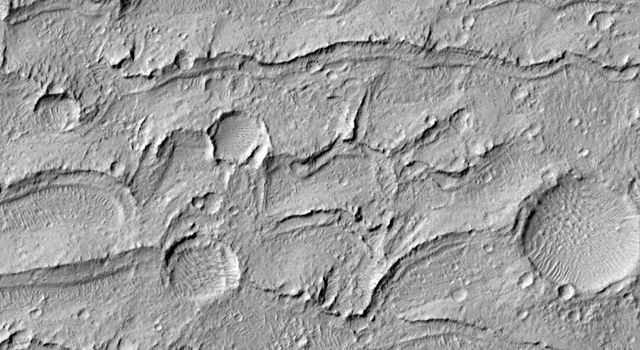 Beginning Thursday, December 16, 1999, the Mars Global Surveyor (MGS) spacecraft initiated a search for visible evidence of the fate of the missing Mars Polar Lander using the high resolution Mars Orbiter Camera (MOC) operated by Malin Space Science Systems of San Diego, California. Mars Polar Lander was lost during its landing attempt near 76.3°S, 195.0°W on the martian south polar layered terrain on December 3, 1999. Although the likelihood of seeing the lander is quite small, the MOC effort might provide some clues that shed light on what happened to the lander. The problem, however, is one of "pixels" -- those little square boxes of different shades of gray that comprise a digital image.

The two pictures above illustrate the difficulty of finding the lander in MOC images. The picture at the top of the page is the first of the images that were acquired to look for the lander -- this one was snapped by MOC around 3:36 p.m. Greenwich time on December 16th. Local time on Mars was about 2 p.m. Portions of this image are shown at 1/4th scale (left), full-scale (~1.5 meters, or 5 feet, per pixel -- middle), and 10 times enlarged (right). Because the landing site is very far south (at this latitude on Earth, you would be in Antarctica), the Sun illumination is not ideal for taking high resolution pictures with MOC. Thus, the full-resolution MOC data for this region show a large amount of "salt and pepper" noise, which arises from statistical fluctuations in how light falling on the MOC charge-coupled-device (CCD) detector is converted to electricity. Other aspects of the MOC electronics also introduce noise. These effects are greatly reduced when taking pictures of portions of Mars that have better, more direct sunlight, or when the images are taken at reduced resolution to, in effect, "average-out" the noise.

The lower picture shows a model of the Mars Polar Lander sitting on a carpet in a conference room at Malin Space Science Systems. This model is illuminated in the same way that sunlight would illuminate the real lander at 2 p.m. local time in December 1999 -- in other words, the model is illuminated exactly the way it would be if it occurred in the MOC image shown above (left). This figure shows what the Mars Polar Lander would look like if viewed from above by cameras of different resolutions from 1 centimeter (0.4 inch) per pixel in the upper left to 1.5 meters (5 feet) per pixel in the lower right. The 1.5 meters per pixel view is the best resolution that can be achieved by MOC. Note that at MOC resolution, the lander is just a few pixels across.

The problem of recognizing the lander in MOC images is obvious -- all that might be seen is a pattern of a few bright and dark gray pixels. This means that it will be extremely difficult to identify the lander by looking at the relatively noisy MOC images that can be acquired at the landing site -- like those shown in the top picture.

How, then, is the MGS MOC team looking for the lander? Primarily, they are looking for associations of features that, together, would suggest whether or not the Mars landing was successful. For example, the parachute that was used to slow the lander from supersonic speeds to just under 300 km/hr (187 mph) was to have been jettisoned, along with part of the aeroshell that protected the lander from the extreme heat of entry, about 40 seconds before landing. The parachute and aeroshell are likely to be within a kilometer (6 tenths of a mile) of the lander. The parachute and aeroshell are nearly white, so they should stand out well against the red martian soil. The parachute, if lying on the ground in a fully open, flat position, would measure about 6 meters (20 feet) -- thus it would cover three or four pixels (at most) in a MOC image. If the parachute can be found, the search for the lander can be narrowed to a small, nearby zone. If, as another example, the landing rockets kicked up a lot of dust and roughened the surface around the lander, evidence for this might show up as a dark circle surrounding a bright pixel (part of the lander) in the middle. The MOC operations team is using a set of these and similar scenarios to guide the examination of these images. The search continues...