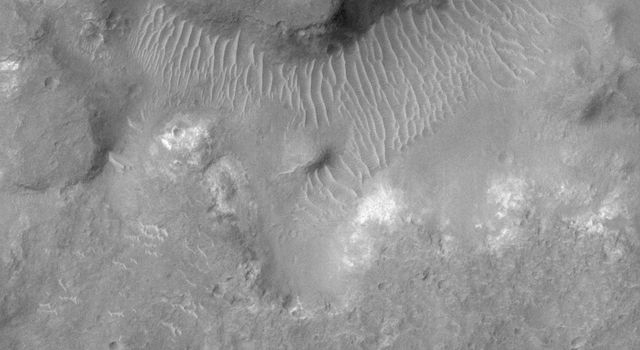 The Terrain of Margaritifer Chaos 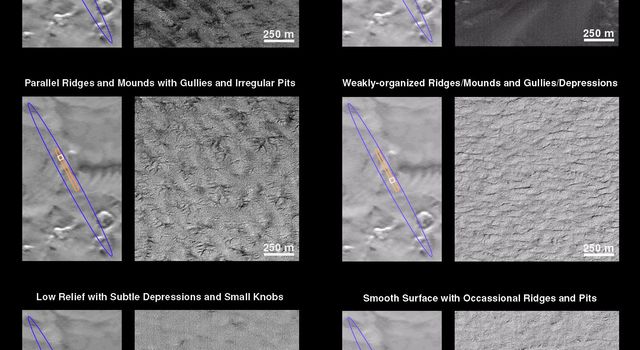 This picture is the first MOC high resolution image that showed the contact between the Lycus Sulci uplands and Amazonis Planitia lowlands. In this subframe of MOC image SPO 1-225/03, Amazonis and Lycus Sulci are separated by a subtle rise that runs diagonally across the scene from near the lower left toward the upper right. The Amazonis plains are toward the top of the picture, the Lycus Sulci uplands are toward the bottom. Both surfaces have been cratered by small meteoroid impacts. The Amazonis plains surface has many small, nearly parallel ridges that may have formed by wind erosion. These ridges are not found on the Lycus Sulci surface. None of the features seen in this image look like typical seashore landforms found on Earth -- i.e., there are no beaches, windblown coastal dunes, or even the wave-cut cliff that was thought to exist on the basis of previous Viking images. The picture is illuminated from the lower right and was acquired in April 1998.

Lycus Sulci is the name of a region of hills and ridges located north and northwest of the famous giant volcano, Olympus Mons (see inset, above). Viking images of the area where the western margin of the Lycus Sulci meets the smooth Amazonis plains (upper left in the figure above) led some researchers to conclude that the two surfaces were in contact along a cliff. The proposed cliff faces toward the smooth plains, and thus it was suggested that this might be the kind of cliff that forms from erosion by waves in a body of water as they break against a coastline.
During the first year that Mars Global Surveyor (MGS) was orbiting the red planet (1997-1998), the Mars Orbiter Camera (MOC) acquired three high-resolution images along the contact between the Lycus Sulci hills and the Amazonis plains. The location of the portion of each image that is illustrated below is shown in this figure by a small, white box identified by the archival image number (e.g., "SPO2-428/03" refers to the 3rd image taken on the 428th orbit during the Science Phasing Orbits 2 phase of the MGS mission). The regional context view shown here is a portion of Viking orbiter image 851A29; its center is near 32°N, 114°W and it is illuminated from the right.

Lycus Sulci and Amazonis Planitia are shown here separated by a rise that runs diagonally across the scene from near the lower left toward the upper right. This picture is a subframe of MOC image SPO2-428/03, taken in July 1998. The Lycus Sulci uplands here are more roughly-textured than in the previous image, and the flat Amazonis plains appear to be more smooth and lack the small parallel ridges seen in the earlier view. The lack of the small ridges might be real, or they might be present but cannot be seen because this picture has a lower resolution than the previous one. This image, too, shows that the contact between Amazonis and Lycus Sulci is not a cliff, and once again there are no features that can be unambiguously identified as coastal landforms.

This is the third MOC image obtained during the first year of MGS operations that shows the contact between Lycus Sulci and Amazonis Planitia. This picture, a subframe of SPO2-483/08, was taken in August 1998. The Lycus Sulciup lands at this location dominate the lower half of the picture, while the Amazonis plains cover the upper half. The uplands here exhibit many small buttes (bumps or knobs in lower right of the scene), and the contact zone between the upland and lowland includes a triangular-shaped ridge (center/right). As with the earlier views of the contact between Lycus Sulci and Amazonis, no features of obvious origin by coastal processes (e.g., erosion by waves crashing against ashore) are seen. The scene is illuminated from the right.

The first picture above shows the regional context of a Mars Global Surveyor (MGS) Mars Orbiter Camera (MOC) high-resolution image that was targeted in August 1998 with the intent to test the hypothesis that the northern plains of Mars were once the site of a vast ocean of liquid water. The second picture shows the resulting MOC image, numbered SPO2-515/05 and located at 40.0°N, 6.0°W in the transition zone between the Cydonia region and Acidalia Planitia, Mars.

The context image (first picture) includes several dark lines, some of which are labeled I and some are labeled G. These dark lines were proposed in previous, peer-reviewed scientific papers to be possible ocean shorelines located along the margins of the martian northern plains. Line I was called the Interior Plains Boundary, and line G was called the Gradational Boundary. The MGS MOC high resolution image was targeted such that it would examine the nature of line I, the Interior Plains Boundary.

The second figure shows the MOC high resolution view. The picture on the left side of the figure (second image) is the full MOC image and the white box indicates the location of the expanded view to the right. In the expanded view (the center of the figure), the location of line I -- the proposed shoreline -- is shown by a dashed curve. The dashed curve follows a subtle, shallow trough. None of the types of coastal landforms common on Earth -- such as a beach, wave-cut cliff or terrace, or coastal dune fields, are seen at this location. If an ocean had once been present, then the water would have covered the top 2/3 of the expanded view -- i.e., water would have lapped up against the rounded mounds in the lower 1/3 of this picture. Instead of coastal landforms, the MOC image exhibits a dark surface in its upper 1/3. The dark surface covers older, rounded hills and has a low, lobate escarpment along its southern margin. This escarpment faces south -- that is, it faces toward the once-proposed coastline. In other words, the escarpment faces in a direction opposite of what would be expected for a coastal environment.

The context picture uses Viking orbiter image 561a24 as a base.

Mars Global Surveyor's (MGS) Mars Orbiter Camera (MOC) took the above picture (second of the two) of some massifs and mesas in the Cydonia region of Mars in early September 1998. The purpose of this image -- number SPO2-532/04 -- was to test the hypothesis that the martian northern plains were once the site of an ocean or large sea. According to this hypothesis, and according to peer-reviewed and published maps, each one of the mesas and massifs in the two pictures above should have shorelines around their margins. The hypothesis holds that these were once islands and that waves would lap -- and sometimes crash -- against these landforms, rip off huge chunks of rock, and create steep cliffs and stair-stepped terraces in the rock.

The first picture above shows the regional context of the MOC high resolution view in Cydonia. The context picture, from Viking orbiter image 227S11, is illuminated from the right. The second picture above is a figure that shows the full SPO2-532/04 MOC image and two expanded views of portions of this image. Mesas are flat-topped uplands, and massifs are the more triangular, massive peaks. If an ocean had been present in this region, terraces that indicate erosion or bathtub rings of salt or carbonate deposits left by the retreat of this ocean as it dried up might be found around each mesa and massif. No such features are found, nor is it at all obvious why these mesas and massifs were portrayed in previously published figures as having shorelines around them. The MOC image is illuminated from the left.

If the northern plains of Mars had ever been the site of a vast ocean, then any highlands that protrude above these plains might be expected to exhibit shorelines. The somewhat curved, flat-topped mesa seen in Viking image 026A72 (first image) is bounded by a dark band. Prior to the Mars Global Surveyor (MGS) mission, this mesa was interpreted by some researchers as having been a possible island in an ancient, northern plains ocean. The dark band was interpreted to be a shoreline resulting from the action of waves lapping against the island's coast.

A high resolution image of the banded mesa -- located on the Acidalia plains around 45°N, 7°W -- was acquired by the MGS Mars Orbiter Camera (MOC) in August 1998, over twenty years after the Viking image was taken. A subframe of this image -- SPO2-515/06 -- is shown in the second image. In the MOC image, the dark band resolves into a series of narrower bright and dark bands. Each band has a slightly different texture and brightness. Furthermore, what appeared to be a sunlit escarpment bounding the north side of the mesa in the Viking image appears in the MOC image to be only a shallow slope rather than a scarp or cliff. The origin of the different bands is not known, but the most likely explanation that would be consistent with other MOC observations of Mars is that the mesa consists of layered rock, and that each band is an outcropping of a different layer of this rock. The different textures would result from the differing resistance to erosion of each layer. Both images shown here are illuminated from the left.