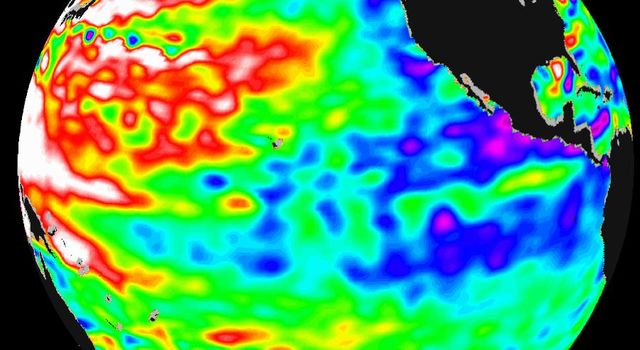 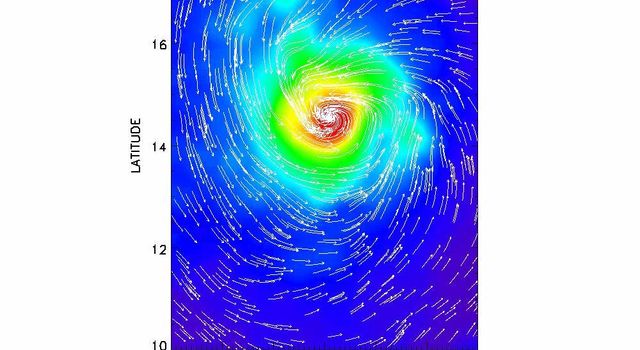 NASA's SeaWinds radar instrument eyed the center of a massive hurricane -- Floyd -- as it ripped past Georgia and the Carolinas Wednesday afternoon, September 15, then marched toward a midnight strike at Cape Fear, North Carolina.

Heralded as one of the most destructive U.S. hurricanes in the 20th century, Floyd has caused the nation's largest peacetime evacuation, forcing approximately 2.6 million people to flee their homes, shutting down airports along the eastern seaboard and, combined with Hurricane Dennis two weeks ago, producing the worst flooding in the country's history.

Taken from data collected between 7 a.m. and 8 p.m. Eastern Daylight Time on September 15, the image shows the fastest ocean wind speeds in yellow and wind direction is indicated by arrows. At the time of the image, Hurricane Floyd was centered at about 79 degrees west longitude and 31 degrees north latitude. The Miami-based National Hurricane Center reported winds that were blowing at speeds of about 185 kilometers per hour (115 miles per hour) at that time. This animation uses data from the evening of September 15, 1999.

NASA's Earth Science Enterprise is a long-term research and technology program designed to examine Earth's land, oceans, atmosphere, ice and life as a total integrated system. JPL is a division of the California Institute of Technology, Pasadena, CA.