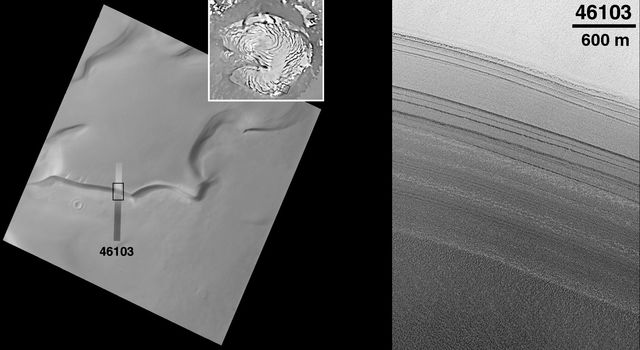 Detailed View of Cliff-face in the North Polar Layered Deposits

"They look like bushes!" That's what almost everyone says when they see the dark features found in pictures taken of sand dunes in the polar regions as they are beginning to defrost after a long, cold winter. It is hard to escape the fact that, at first glance, these images acquired by the Mars Global Surveyor (MGS) Mars Orbiter Camera (MOC) over both polar regions during the spring and summer seasons, do indeed resemble aerial photographs of sand dune fields on Earth -- complete with vegetation growing on and around them! Of course, this is not what the features are, as we describe below and in related picture captions. Still, don't they look like vegetation to you? Shown here are two views of the same MGS MOC image. On the left is the full scene, on the right is an expanded view of a portion of the scene on the left. The bright, smooth surfaces that are dotted with occasional, nearly triangular dark spots are sand dunes covered by winter frost.

The MGS MOC has been used over the past several months (April-August 1999) to monitor dark spots as they form and evolve on polar dune surfaces. The dark spots typically appear first along the lower margins of a dune -- similar to the position of bushes and tufts of grass that occur in and among some sand dunes on Earth.

Because the martian air pressure is very low -- 100 times lower than at Sea Level on Earth -- ice on Mars does not melt and become liquid when it warms up. Instead, ice sublimes -- that is, it changes directly from solid to gas, just as "dry ice" does on Earth. As polar dunes emerge from the months-long winter night, and first become exposed to sunlight, the bright winter frost and snow begins to sublime. This process is not uniform everywhere on a dune, but begins in small spots and then over several months it spreads until the entire dune is spotted like a leopard.

The early stages of the defrosting process -- as in the picture shown here -- give the impression that something is "growing" on the dunes. The sand underneath the frost is dark, just like basalt beach sand in Hawaii. Once it is exposed to sunlight, the dark sand probably absorbs sunlight and helps speed the defrosting of each sand dune.

This picture was taken by MGS MOC on July 21, 1999. The dunes are located in the south polar region and are expected to be completely defrosted by November or December 1999. North is approximately up, and sunlight illuminates the scene from the upper left. The 500 meter scale bar equals 547 yards; the 300 meter scale is also 328 yards.