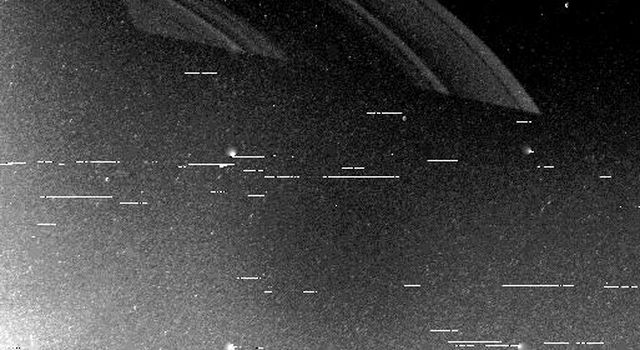 Saturn's Shadow Upon the Rings

Voyager 2 took this picture of Ganymede on 5 March 1979. It was taken with the narrow-angle camera from a range of 270,000 kilometers. Clear examples of several of the different types of terrain common on Ganymede's surface are visible. The broad light regions running through the older dark areas are the typical grooved structures seen within most of the light regions on Ganymede. Many examples of craters of all ages can be seen in this image, including fresh, bright ray craters, large, subdued circular markings thought to be the "scars" of large ancient impacts and craters with thin, bright rims a small central crater. The Voyager Project is managed by the Jet Propulsion Laboratory for NASA's Office of Space Science.