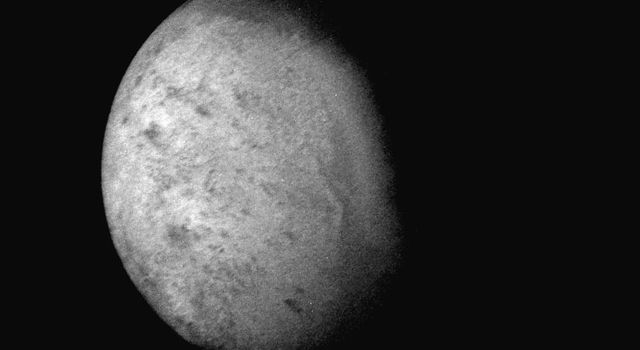 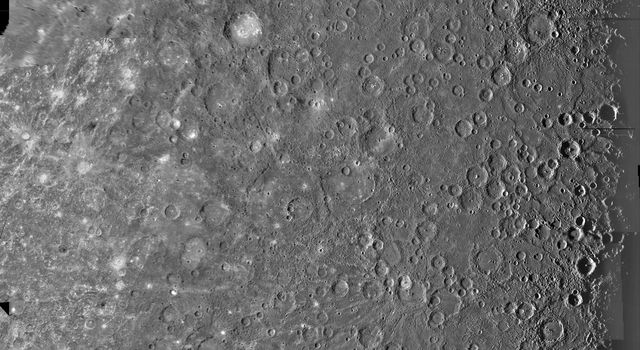 This picture of Triton is a mosaic of the highest resolution images taken by Voyager 2 on Aug. 25, 1989 from a distance of about 40,000 kilometers (24,800 miles). The mosaic is superimposed on the lower resolution mapping images taken about 2 hours earlier in order to fill in gaps between high resolution images. The smallest features that can be seen on the images are about 0.8 kilometers (0.5 miles) across. The terminator (line separating day and night) is at the top of the picture and is centered at about 30 degrees north latitude and 330 degrees longitude. These highest resolution images were targeted for the terminator region to show details of the topography by the shadows it casts. Near the center of the picture is a depression filled with smooth plains that are probably ices which were once erupted in a fluid state. The depth of the depression is about 300 meters (900 feet) and the prominent fresh impact crater on its floor is about 20 kilometers (12 miles) in diameter and about 1 kilometer (0.6 mile) deep. On the right is an elongate crater with adjacent dark deposits above it. This feature may be an explosive eruption vent formed by gaps within the ice. The linear structure on the left is probably a fracture along which fresh ice has been extruded. The Voyager Mission is conducted by JPL for NASA's Office of Space Science and Applications.