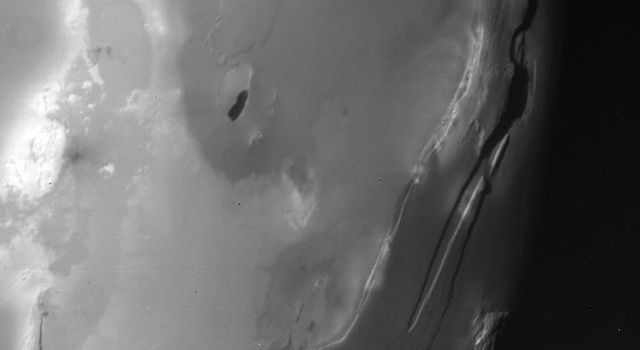 This picture of Io was taken on the morning of March 5 at a rang eof 75,445 kilometers. The area shown is at latitude 15 south longitude 244 . Many depressions and elevations are shown. The light is coming from the left, so a depression has a bright right wall and shadow on the left wall. The depressions are complex in shape and do not resemble impact craters. Two of the depressions are joined by a shallow trough. The elevations are irregular and comical. They are cut by linear and irregular troughs. The surface is smooth and plain-like, that is, the surface is not pockmarked by abundant impact craters so are probably geologically young. The Voyager Project is managed and controlled by the Jet Propulsion Laboratory for NASA's Office of Space Science.